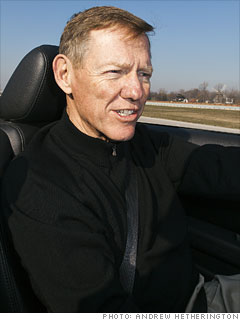 There isn't much glamour in what Alan Mulally does, toiling in America's Rustbelt. But when you're compiling a list of MVPs in American business, how can you not vote for him? Here's an auto outsider who has taken Ford from near bankruptcy to a global leadership position. Our readers sure noticed: In an online competition, they ranked him first. It's not a surprise. No one has done more to revive a moribund company in a sickly industry in a lackluster economy. His One Ford plan, aiming to build the Ford brand by emphasizing the critical ingredients that make a Ford a Ford, has put the car maker back on the road to financial stability. His levelheaded leadership (develop a clear point of view and an operating plan; align culture with plan) soothed a fractious management team. And the company has started to produce cars that consumers actually want to buy. In 2010, Mulally opened a new front in his drive to institutionalize Ford's revival by turning his attention overseas. At his urging, Ford opened one assembly plant in China, expanded another, and started building a third. In India, where Ford tripled sales in 2010, Mulally announced a second assembly plant to double capacity. In South America, Ford made major investments in Brazil and Argentina. At home Mulally put the final touches on his successful corporate streamlining by announcing the closure of Mercury, the divestment of Ford's Mazda shares, and the completion of the Volvo sale. He also opened the door to talk about how to boost Lincoln -- Ford's remaining premium brand -- globally, with seven new models in the next four years. After falling as low as $1.43 a year ago, Ford shares are now pushing $17. Other CEOs with younger companies in fast-growing industries have posted flashier numbers. But it's hard not to be wowed by the turnaround skills required to revive a 107-year-old manufacturer in America's heartland.

NEXT: 3. Steve Jobs
Last updated November 19 2010: 10:47 AM ET
More from Fortune
Reader's Choice
After a month of rabid online voting you crowned your own Businessperson of the Year. More
Reed Hastings: Leader of the pack
Executives from Silicon Valley to Hollywood to Wall Street admires his savvy persistence - and his company's cool culture. The secret to the Netflix CEO's success? He never stops looking over his shoulder. More
When they were young
Michael Dell was 21 when he first appeared in Fortune. Bill Gates made the cover when he was 30. Here's a look back at some of today's biggest business leaders when they were climbing the corporate ladder. More