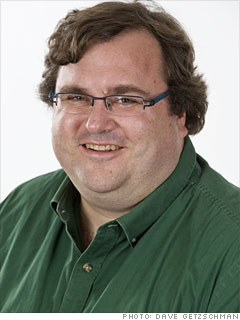 The co-founder of LinkedIn has been called "the most connected person in Silicon Valley." He's also been the go-to guy for entrepreneurs seeking angel funds, helping seed Facebook, Flickr, Zynga and others. That reputation was cemented this year when Hoffman became a bridge between the new "super angel" world -- angels who invest others' money, not just their own -- and traditional venture capitalists. In September, he helped drag veteran VC firm Greylock into the super-angel game, convincing his partners to set aside $20 million for seed-stage investing.

NEXT: 42. Robert Benmosche
Last updated November 19 2010: 10:47 AM ET
More from Fortune
Reader's Choice
After a month of rabid online voting you crowned your own Businessperson of the Year. More
Reed Hastings: Leader of the pack
Executives from Silicon Valley to Hollywood to Wall Street admires his savvy persistence - and his company's cool culture. The secret to the Netflix CEO's success? He never stops looking over his shoulder. More
When they were young
Michael Dell was 21 when he first appeared in Fortune. Bill Gates made the cover when he was 30. Here's a look back at some of today's biggest business leaders when they were climbing the corporate ladder. More