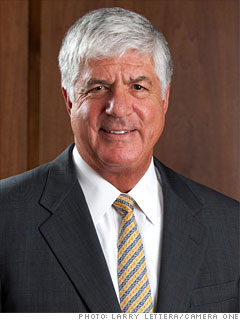 The former MetLife chief was brought in last year to do the impossible: return AIG to viability and repay $130 billion in government bailout money. For now, it appears Benmosche will do both. In September, he announced plans to repay the government by the end of next year, and after unloading an assortment of insurance properties, AIG's stock is beginning to show signs of life. His immediate concern: fighting cancer -- he won't disclose the type -- which he was diagnosed with in October.

NEXT: 43. Brian Roberts
Last updated November 19 2010: 10:47 AM ET
More from Fortune
Reader's Choice
After a month of rabid online voting you crowned your own Businessperson of the Year. More
Reed Hastings: Leader of the pack
Executives from Silicon Valley to Hollywood to Wall Street admires his savvy persistence - and his company's cool culture. The secret to the Netflix CEO's success? He never stops looking over his shoulder. More
When they were young
Michael Dell was 21 when he first appeared in Fortune. Bill Gates made the cover when he was 30. Here's a look back at some of today's biggest business leaders when they were climbing the corporate ladder. More