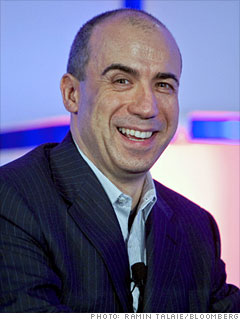 The Russian investment boutique (formerly known as Digital Sky Technologies) stands to become one of the hottest public offerings this year thanks to the company's investments in Internet darlings Groupon and Zynga, as well as controlling stakes in companies that account for some 75% of the pages served on the Russian-speaking web. But the biggest jewel in Milner's crown is a roughly 8% stake in Facebook, an $800 million investment that makes Mail.ru the social network's second-largest outside investor.

NEXT: 47. Lloyd Blankfein
Last updated November 19 2010: 10:47 AM ET
More from Fortune
Reader's Choice
After a month of rabid online voting you crowned your own Businessperson of the Year. More
Reed Hastings: Leader of the pack
Executives from Silicon Valley to Hollywood to Wall Street admires his savvy persistence - and his company's cool culture. The secret to the Netflix CEO's success? He never stops looking over his shoulder. More
When they were young
Michael Dell was 21 when he first appeared in Fortune. Bill Gates made the cover when he was 30. Here's a look back at some of today's biggest business leaders when they were climbing the corporate ladder. More