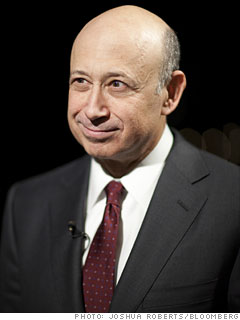 After observing that there was a "disconnect" between how Goldman views itself and how the public perceives the firm, Blankfein tried to rehabilitate the firm's image with an earnest ad campaign and by telling his employees to clean up their language in emails. Goldman's assorted businesses need no polishing. The investment bank led the world this year in mergers and acquisitions work, including Novartis's $28 billion purchase of Alcon and Intel's $7.7 purchase of McAfee, and underwriting initial stock offerings.

NEXT: 48. Doug Oberhelman
Last updated November 19 2010: 10:47 AM ET
More from Fortune
Reader's Choice
After a month of rabid online voting you crowned your own Businessperson of the Year. More
Reed Hastings: Leader of the pack
Executives from Silicon Valley to Hollywood to Wall Street admires his savvy persistence - and his company's cool culture. The secret to the Netflix CEO's success? He never stops looking over his shoulder. More
When they were young
Michael Dell was 21 when he first appeared in Fortune. Bill Gates made the cover when he was 30. Here's a look back at some of today's biggest business leaders when they were climbing the corporate ladder. More