What the bond guru sees coming 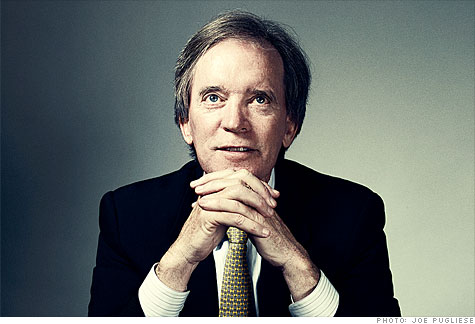 (Money Magazine) -- Bill Gross, co-chief investment officer of Pimco and manager of the planet's biggest bond mutual fund, has some so-so news and some bad news.

First, the so-so: Inflation and higher interest rates aren't a huge threat in the near future, so all those U.S. government bonds you may have been investing in recently are okay for now.

The bad news? The world economy is still in lousy shape. At best, investors can expect a "new normal" era of slow growth and lower returns on stocks, bonds, and everything else.

Actually, Gross's case for the new normal isn't all that new. He was predicting a long era of weak returns well before the financial crisis kicked in. Gross isn't always spot-on in his public calls: He was dissing now hot Treasuries as recently as April.

Still, he has consistently crushed most of his competition. Harbor Bond fund, the Money 70 pick that's a cheaper near clone of his flagship Pimco Total Return, has delivered a 7.5% annualized return over the past decade. That's compared with 5.4% for the average intermediate-term bond portfolio. Gross spoke in mid-June with assistant managing editor Pat Regnier at Pimco's offices in Newport Beach, Calif. Edited excerpts follow.

A lot of people, including Money's editors, worry that there's a bubble in the bond market, especially in Treasuries. What's your take?

The right time to ask that question would have been in the beginning of 2009. That's when we were in the throes of the big-R recession, and the 10-year Treasury was paying just over 2%. [When bond prices rise, their yields fall.] So it was certainly a bubble then. It's less bubbly now. At a yield of around 3.1%, Treasuries are fairly valued, considering the low expected inflation and slow growth ahead. Investors are finding it hard to get used to such a low yield. But they're going to find it hard to get used to the slow growth -- or what we at Pimco call the "new normal" -- throughout the economy. In that context, a 3.1% yield is okay. It's a milquetoast valuation.

You've recently shifted money back into Treasuries. What changed?

We've recognized that there's a flight to quality, to safe-haven assets. That's because of very slow growth worldwide and financial market chaos. We're having a mini-replay of 2008. Money is fleeing from countries like Greece. Everyone is trying to find what we call the least dirty shirt. And the U.S. is the least dirty shirt. As Will Rogers said, "I'm not so much concerned about the return on my money as the return of my money." In this market, return of money is beginning to become a dominant theme.

A lot of our readers look at the U.S. debt and the Fed's stimulus efforts, and they wonder whether even Treasuries can be safe. Shouldn't we be worried about inflation and higher rates?

That's legitimate. It's not just the deficit, which is around $1.5 trillion and 10% of the economy now. It's also entitlements. Health care is a huge cost that's going to hit the table in the next few years as the boomers age. And at some point even the cleanest dirty shirt is going to come under scrutiny by investors.

But at the moment the U.S. is the reserve-currency country. We have a comparatively low debt-to-GDP ratio. The whole world got hooked on debt -- not just subprime homeowners but governments.

We ask ourselves every day, "If we had to invest our $1.1 trillion somewhere and we didn't like the U.S., where could we go?" Canada and Australia are in decent shape. Germany has been okay but is starting to get infected by Europe's troubles. Overall, the U.S. is still the clearest pond in the forest.

You will probably be the first for the exits if Treasuries seem about to lose their safe-haven status. It's harder for the rest of us to time those shifts. Should individuals be as comfortable as you are buying Treasuries?

Not really. As a group, combining long- and short-term bonds, the yield is just 2%. And as you note, their safe-haven status can only go down over time.

What about the possibility of deflation occurring?

We're in a struggle between inflation and deflation right now. We may never get to a negative consumer price index, but the danger is a drop in asset prices and the destruction of credit. It means corporate bonds defaulting because companies aren't getting enough business and they can't pay off their debts. It means foreign governments defaulting. It's individuals with mortgages who can't get out from under their 16 tons of debt. The economy can't recover, and unemployment stays high. Stocks would be in trouble because some companies would be going bankrupt while others couldn't get the credit they need to grow.

So which is the bigger risk now -- inflation or deflation?

Our investment committee has sketched out four possible scenarios. Scenario A is that the global economy rebounds back to past levels of high growth. B is just a decent rebound. C is that new normal -- half-sized growth. And D is deflation, debt, destruction. I'd say we're at a C -- right now. We believe in the new normal, but what we're seeing in Europe puts the minus on that C grade.

What does the "new normal" mean for our readers?

Instead of 10% returns for stocks, look for five or so. And instead of the past 20 years' returns on bonds, which are actually better than stocks -- close to double digits -- it's 4% going forward. So that's what the new normal is. And it's based upon the primary assumptions of a deleveraging of the private sector and the public sector being limited in what it can spend.

If stocks might return just a percentage point or two over bonds, does that justify the risk?

Why is it so hard to get growth going?

The lack of what economists call aggregate demand. So much of the world's growth and financial surplus have shifted to Asia, where people are fixated on saving instead of buying. Consumption in China is just 35% of GDP, half our rate.

What should investors make of the Fed's policy of keeping rates close to zero?

The Federal Reserve wants your readers and Pimco to make a choice. You get almost nothing if you hold short-term Treasury bills. The Fed wants you and Pimco to buy the assets that were depressed 18 months ago -- stocks, high-yield bonds, etc. -- to restimulate the economy. Because this economy has been based on asset appreciation.

Are those the right policy moves? It seems as if we're just maintaining America's dependence on high asset values and debt.

I think it's the only choice, although there's debate here. You have people like economist Paul Krugman on one side who suggest we must do whatever is necessary to avoid deflation. Advocates on the other side basically echo what Treasury Secretary Andrew Mellon said at the start of the Depression, that we have to liquidate -- let real estate, asset values, and wages fall -- and then we can start to grow again. I've always felt that if you did that, if you liquidated everything, then optimism, the necessary ingredient for successful capitalism, would completely be eliminated.

At the same time, I admit we should have stopped the habit of debt and asset appreciation long ago. We didn't. Too bad. But at this point what the Fed wants, what the Treasury wants, what the European Union wants, is for the economy to renormalize, so that governments can play lesser roles, and the private sector can do its thing.

If the biggest dangers are overseas, does it still make sense to diversify your portfolio globally?

Yes, definitely. As a bond investor, however, the problem is that many parts of the world that are doing well and will probably continue to do relatively well -- China, much of Asia, Brazil -- don't have developed credit markets. We've been buying Brazilian bonds hand over fist. Brazil has low debt, and it has really high interest rates. But an individual would have a hard time doing that. Investors can't buy a Chinese bond -- their debt is internalized. But you can also diversify by investing in developing-market equities.

States and cities are going broke left and right. Should investors be worried about muni bonds?

Warren Buffett, as usual, zeroed in on this. It all depends on whether or not the federal government rescues the states. It has done it in the past 12 to 18 months, with stimulus packages, with Medicaid and education grants, and so on. And Obama is proposing more help.

So you're suggesting there might be an opportunity there?

At the moment, the Republican orthodoxy is gaining sway, so the administration has to be careful as to what checks it writes. But I can't imagine California, Illinois, or New Jersey going under. We've been buying some taxable munis. We bought New York City bonds last week, which gets us a 6.5% yield.

That's a nice yield, but overall this "new normal" of low returns won't be much fun.

The important thing to recognize is that if you're looking for 10% returns to pay for college or to retire on, they're not going to be there. We've been an asset-growth-based economy for so long. We've skimmed off the top, living off second and third mortgages on homes, and capital gains on stocks and even on bonds. Now instead of having money work for you, you've got to work for your money.