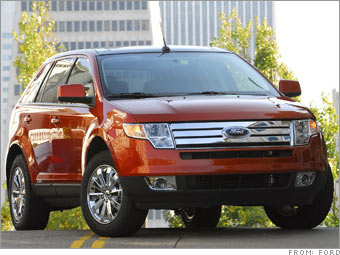 The Edge is based on the engineering underpinnings of the Ford Fusion sedan. That's not something Ford is trying to hide. With its three-bar grille and geometric headlights, the Edge even bears a passing resemblance to the Fusion. Compared to the similarly priced and sized Ford Escape, the Edge is supposed to appeal to those who want an SUV that looks and acts more like a car.

Here's the funny thing, though. It doesn't.
More
Lincoln MKZ

Ford reworks its small luxury model creating an impressive car. (more)
Extreme marketing: This car made just for you

Car companies send researchers into the field to find, catalog and research the myriad species of car buyers. (more)