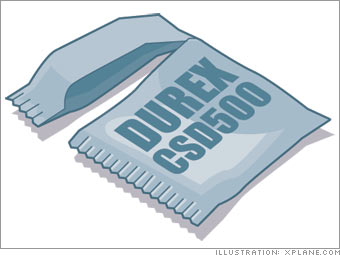 Condoms invade Viagra's turf
When Viagra first cleared the FDA hurdle in 1998, it was the butt of a thousand talk-show jokes. But that didn't stop it from becoming a $1.6 billion bonanza for parent company Pfizer. It meets a need, and that same need is moving Durex to launch a revolutionary condom, the CSD500, in late 2007. Its secret sauce: an "erectogenic compound" called Zanifil, patented by tiny U.K. company Futura Medical. Pending FDA approval, Zanifil will be the first Viagra-like chemical to be sold over the counter. But it has to be applied directly to the skin - hence the Durex partnership. If it accomplishes anything near Viagra's sales, Futura will be standing proud.
More
Executive wish list