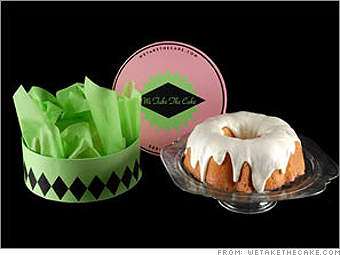 We Take The Cake
When Oprah's team chose the We Take The Cake's Florida key lime Bundt cake as one of Oprah's Favorite Things in 2004, owner Lori Karmel said she was given no guidance.

"They said be prepared because you're going to get slammed, but there was no indication as to what that meant."

As the only small business among Oprah's Favorites that year, We Take The Cake's five employees, three phone lines and one ill-equipped server were no match for the onslaught following the show.

"Our server got knocked down in the first four hours. The phone started ringing the minute our cake aired - and it rang off the hook around the clock for a full week," Karmel said.

With Karmel's friends and family returning calls from home, the bakery sold 10,000 cakes during the 2004 holiday season, most of which were key lime.

Since then, the cakes have been on the Food Network and sold through Neiman Marcus and will be carried by Dean and Deluca starting in January. "We're also working on something for William Sonoma and I'm talking to Whole Foods," Karmel said.

Karmel advises other small businesses hit with instant success to follow her lead, "once things slow down, you have to create opportunities."
More
Extravagant toys for spoiled rich kids

These toys are all the rage - among children of the obscenely wealthy. (more)
25 great gifts from 5 major stores

Money Magazine brings you the best gifts at the best prices at five retailers you can't avoid. (more)
The ultimate holiday tipping guide

Wondering how much to tip your mail carrier, dog walker or hairdresser for the holidays? Here's some help. (more)