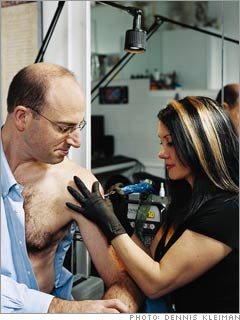 Like a Vegas wedding, getting a tattoo can be a regrettable experience. While about one out of four Americans now has a tattoo (up from one out of six in 2003), 17 percent will seek to have them removed at some point in their lives, according to a recent study. Worse, the FDA does not regulate the tattoo industry, and some inks contain harmful toxins. However, a Manhattan-based startup called Freedom-2 aims to solve both issues with a new durable but removable tattoo ink.

Co-founder Rox Anderson, a professor of dermatology at Harvard University who pioneered several nonscarring laser treatments for blemishes such as birthmarks and skin lesions, helped design the ink using FDA-approved, digestible pigment particles. Tattoos using Freedom-2 ink are professionally applied using a standard needle, but they can be removed with a simple laser treatment that will release the ink from the skin into the body, where it can be safely reabsorbed.

The laser removal treatments cost about $1,000 (compared with the $5,000 to $10,000 spent to remove conventional tattoos). CEO Martin Schmieg, whose upper left arm sports a removable tattoo in the shape of the Freedom-2 logo (gothic font, biker style), expects the ink to be begin appearing in about a dozen tattoo parlors early in 2007 and to cost about four times the price of standard ink. --Brandi Stewart
More
Battle of the business plans