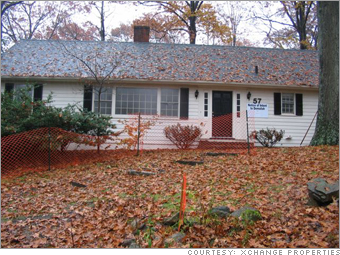 New Canaan, Connecticut
$750,000
A number of clues immediately marked this ranch house as an almost certain teardown. There were a number of new constructions on the street, the design was dated, the house is small for the area and it had gone without some routine maintenance. Cher Wyskiel, of Xchange Properties, says a faint moisture odor probably indicated water damage.

New Canaan, with two Metro North stations, is an easy commute to midtown Manhattan and is even closer to the corporate headquarters in Stamford. It's one of the most affluent towns in The United States.
More
See what seven figures buys

Our quarterly look at what 6 zeros will get you. (more)
Top 10 cities: Where to buy now

The real estate slump could get worse before it gets better. But these 10 markets offer great opportunities for those who have the patience to buy and hold. (more)