The proposed Yahoo deal, and other companies' efforts to thwart it, show how powerful the search leader has become. 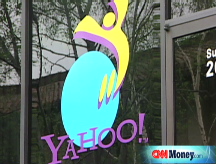 (FORTUNE) -- It's a Google world, and all the other players - Microsoft and Yahoo in particular - are just looking for way to stand tall in it.

That world of course is the Net, and Google (GOOG, Fortune 500)'s sustained strength in turning search and other Web-based applications into revenue has left the rest of the pack collectively wheezing and wanting to make deals to rally a defense. All this casting about for winning strategies has created several plausible moves and, as some have characterized, some desperate proposals.

Yahoo's board is meeting today to consider options, according to a report Friday in the Wall Street Journal. At the top of the agenda is a deal with Microsoft, which seems to be the consensus choice among analysts and industry observers. The board will likely also weigh a possible pact with Time Warner (TWX, Fortune 500), Fortune's and CNNMoney's parent. This arrangement would swap Time Warner's AOL unit for a 20% equity stake in Yahoo, and a big pile of cash to buyback shares in the event of a sell off.

Nine weeks after Microsoft (MSFT, Fortune 500)'s unsolicited $31-a-share, or $42 billion, cash-and-stock bid, Yahoo (YHOO, Fortune 500) still lacks a superior bid from any other large suitors. Short of that, Yahoo said Wednesday it will test an advertising partnership with Google that would pump up revenue and help lower costs

And, as Fortune's Yi-Wyn Yen confirmed, the company has talked about a combination with AOL.

From the Yahoo board's perspective, this is a very good development, said one money manager who asked not to be named. "It gets them off the hook for legal liabilities after they rejected Microsoft's bid," the money manager said. "It also throws the ball back into Microsoft's court."

Wall Street analysts seemed to applaud Time Warner's ability to use Yahoo's weak position as an opportunity to park its AOL unit on someone else's lot.

"The deal would allow Time Warner to hand off the management of AOL to Yahoo, which we would view as a positive," wrote Cowen analyst Doug Creutz in a note Thursday. "However, the value of the Time Warner stake would then be tied to Yahoo's stock price, which could be at risk of further erosion given Yahoo's second-class status relative to Google."

For its part, Microsoft has reportedly had discussions with News Corp (NWS, Fortune 500). to combine MySpace with MSN and Yahoo to create some sort of massive Internet venture, according the New York Times.

What's clear is that Microsoft is serious about expanding its shop on the Web, and, more importantly, fend off Google's encroaching threat.

Microsoft's own Internet initiatives haven't exactly taken flight. Franchises such as MSN , formerly hotmail, and Web 2.0 initiatives such as .NET have lost a little of their shine over time. And while Microsoft's highly profitable Windows desktop software continues its dominance in the PC space, the business of the computers it runs is looking a little clunky as sleeker machines and Net-based applications come along.

As some tech fans might view it, it's the dawning of the Google, Research in Motion, Apple or Grimple era, and the twilight of the Windows Intel or Wintel period.

Observers say the net effect is that Microsoft needs the deal - and if Yahoo is successful, it won't go cheaply.

"We believe the Street will weigh this news more toward providing negotiating leverage for Yahoo to get Microsoft to raise their bid price than as a credible tool for Yahoo to garner shareholder support to pass on Microsoft's offer," wrote Merrill Lynch analyst Justin Post.

The fact that Yahoo may be able to work another offer, as inelegant as it may be, suggests Microsoft now has to tinker with its offer.

This might be enough, said the money manager "for Yahoo to get them to make it an all-cash offer, since there's no certainty about what would happen to Microsoft's share price."

Here's one safe bet: A year from now, people interested in how the Microsoft- Yahoo deal developed will probably search on Google.