Blockbuster wants to live in your TV

The movie rental behemoth has revealed a billion dollar bid for struggling electronics retailer Circuit City in a move to get into your next TV. 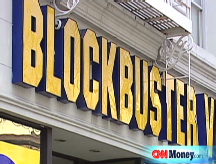 NEW YORK (Fortune) -- Blockbuster Inc. revealed Monday that it has made a $1.3 billion offer to purchase struggling big-box electronics retailer, Circuit City to set in motion a plan to sell devices that can be preloaded with or preconfigured for Blockbuster movies.

The offer was initiated in a private letter from Blockbuster CEO Jim Keyes, sent to Circuit City CEO Philip Schoonover in mid-February. "The combination of Blockbuster and Circuit City will result in an $18 billion retail enterprise uniquely positioned for the convergence of media content and electronic devices," Keyes wrote.

In a conference call with investors, Keyes called the combined company "the ultimate distribution channel for digital content." Keyes offered vague insight into what he called a content-enabled device that the combined entity might sell to consumers along with Circuit City's TVs, DVD players, and gaming devices.

Blockbuster, the Dallas, Texas-based movie rental and retail company operates over 6,000 stores in the U.S. and around the world. In the U.S., 95 percent of Circuit City's 682 stores are within 5 miles of a Blockbuster outlet.

Rumors have been circulating that the company has been in talks with device-makers, collaborating on a living room box that downloads and plays movies. The combination of the companies would open the market to content devices, "ones that fit in your pocket to ones that hang on your living-room wall," Keyes told investors Monday morning.

Circuit City has been struggling to compete with Best Buy, Wal-Mart and others in the discount electronics space. The retailer's revenue fell 5.5 percent in 2007 to $11.7 billion.

Indeed, in recent years, the business has undergone a transformation, expanding its offerings beyond in-store VHS, DVD, and video game rentals. Those new initiatives have gone into hyperdrive under new CEO Jim Keyes who took over the company last July. The company now operates a combination mail-order and online movie rental business, which has been further enhanced by the Keyes's acquisition of Movielink last August.

Circuit City's board said it is "unwilling to provide Blockbuster with additional detailed due diligence information... until these questions are answered satisfactorily."

Despite some gloom and doom predictions, the movie rental business has been thriving. According to Digital Entertainment Group, Americans spent $1.4 billion renting DVDs in 2001; that grew to $7.5 billion in 2006.

Blockbuster - despite being one of the largest players in the business - has been unable to capitalize on that growth. Between 2001 and 2005, Blockbuster posted five consecutive years of net income losses.

In 2006, Blockbuster eked out a tiny net income of $54.5 million on revenues of $5.46 billion. Growth flattened in 2007, in part because of the rise of online downloads and video-on-demand services offered by cable providers. In the last year, Blockbuster's shares have plummeted by more than half. The S&P 500 has dropped just 3 percent over the same period.

Even so, Keyes has received plaudits for his work cutting costs and boosting revenue so far. A handful of observers believe Blockbuster has a chance to do well - if only in the next few years. The company's new Movielink subsidiary is key. The online movie download service was created in 2002 by a group of major movie studios including MGM Studios, Paramount Pictures, Sony Pictures (SNE), Universal Studios, and Warner Bros (which, like Fortune and CNNMoney.com, is owned by Time Warner (TWX, Fortune 500)). Those studios poured a reported $100 million into creating the service's infrastructure but spent very little to promote it.

In the midst of poor uptake from consumers, Blockbuster stepped in and purchased the operation for $6.6 million in cash, according to the company's SEC filings. Although Movielink cannot yet be called a success, it does give Blockbuster the digital rights to some 6,000 films, and provides an infrastructure for digital downloads that it can use as part of its pre-existing Total Access service.

So, with the content in place, Blockbuster in now seeking a way to push those movies into homes. However, says Wedbush Morgan's Pachter, "There is synergy there, but I just don't think the future is in pre-loaded proprietary devices. Blockbuster has a vision that is just not real."

Richard Doherty, research director at Envisioneering Group, agrees. He points out that there are several set-top movie rental solutions already on the market?including Microsoft's Xbox 360, Apple's Apple TV, and Vudu, make by privately held Vudu of Santa Clara, Calif. Netflix announced in January that it is teaming up with LG Electronics to create a set-top box as well.

"Consumer acceptance has been poor and scattered," Doherty says. "The real winner in the set top battle has been TiVo. They are in 2.5 million homes. And through a deal with Netflix, they already offer access to movie rentals."

Besides those competitive challenges, both Blockbuster and Circuit City have tried and failed at similar services in the past decade.

Circuit City introduced a proprietary movie rental platform called DIVX in 1998, which created some confusion among consumers and never caught on. Blockbuster also tried a video-on-demand service in 2000, using none other than Enron as the service's network provider.

The deal was quickly scuttled because Enron failed to obtain permission from telecom providers to use their backbone as a conduit for the movie rentals. And for its part, Blockbuster discovered it did not have the proper rights to distribute the movies online.