The ambitious plan to create the world's largest airline increases costs but may not improve revenues. 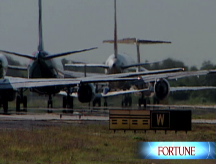 NEW YORK (Fortune) -- With his slicked back hair and rimless glasses, Delta CEO Richard Anderson looked like an older Clark Kent when he strode to the podium at the Barclay Hotel in New York Tuesday morning. And perhaps underneath that dark suit was, in fact, a superman costume. That's because in less than a year at the helm of Delta, he pulled off what was thought to be an impossible task - a $17.7 billion merger with Northwest to create the world's largest airline.

But can Anderson's superhuman strength wring a stronger company out of a combined Delta (DAL, Fortune 500) and Northwest (NWA, Fortune 500)? And will the copycat mergers that are expected to follow strengthen the industry? It's certainly no slam-dunk, as the new Delta will raise its costs in the near term without offering a concrete way to substantially increase revenues.

Investors panned the deal, with both Delta and Northwest stock down sharply by midday Tuesday.

Ever since the days of Juan Trippe's Pan Am, there has been a persistent fantasy among aviation CEOs that he who has the most planes (and flies the most routes) wins. In today's parlance, you might call that the Delta Model. Anderson believes that the best way to survive $110-a-barrel oil is by growing into a carrier with potential revenues of $30 billion.

But in doing so, he plans to defy the conventional wisdom of airline mergers and create what some believe would be a dangerous model for the industry's long-term sustainability. There are two strategies management traditionally deploys in airline mergers - cutting overlapping flights to slash costs or expanding globally to increase revenue. Trimming routes was the approach touted by US Airways in its unsuccessful bid for Delta last year. At the time, US Airways (LCC, Fortune 500) suggested it could save nearly $1 billion by combining the two carriers and lopping 10% off the flight schedule.

At Tuesday's press conference, Anderson made it clear he was not cutting routes or hubs. The plan rests on combining two complementary networks of routes. That makes sense in theory: Northwest has a large Asian network, and Delta has a large European and Latin American one. So why not combine the two while making better use of the company's airplanes? Use Northwest's large Boeing 747s through high-traffic Atlanta instead of Minneapolis, for example. These proposed efficiencies will create more than $1 billion in revenue synergies, Anderson said. "It's a combination about addition not subtraction," he added at the press conference. "In a network business, scale and scope are important."

In practice, analysts say, increasing revenues through increased efficiencies will be hard to come by. One plus one rarely equals three. "The appeal of consolidation is redundancy - the network overlap - that can be eliminated," JP Morgan analyst Jamie Baker wrote in a recent report. "The value creation comes in the form of shedding duplication."

Then there are the pilots. The original plan for the merger when it was first touted earlier this year included a seniority integration agreement so the airline could instantly combine the workforce. But after Northwest and Delta pilots couldn't agree, Delta's management made a lucrative deal with its own pilots that guarantees them a 5% pay raise next year and a 4% raise for the next three years. Even better for the pilots, it guarantees them no layoffs for the first two years after the merger closes. That means Delta can't reduce the number of planes or routes it flies.

But management failed to come to any agreement with Northwest's pilots, who generally outrank Delta's pilots in seniority, and are far from happy with the deal. "One can only conclude that the Delta pilot leadership and Delta management have made an arrangement to try to disadvantage the Northwest pilots economically and with respect to our seniority," wrote Dave Stevens, the head of Northwest's pilots union, in a letter to his colleagues. "No pilot group is going to put up with this. No amount of money can sustain a carrier which creates this level of discord. This is a recipe for failure."

Until Northwest pilots are on board with the deal, Delta can't combine operations. It seems inevitable that the new Delta will eventually have to offer a similarly generous deal to Northwest pilots -- pushing labor costs even higher.

None of this bodes well for the airline industry. After a Northwest-Delta deal, expect to see the remaining large carriers - American (AMR, Fortune 500), Continental (CAL, Fortune 500), United (UAL) and US Airways - attempt similar mergers with similar terms. And then what do you have? Bigger companies flying the same routes with the same airplanes - only now with higher labor costs. For some reason, in the airline business, people always forget that bigger doesn't mean better.