RBS chief gets off scot-free

The CEO dubbed 'Fred the Shred' for his cost-cutting habit escapes the firing line - for now. 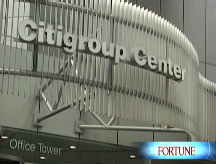 (Fortune) -- Even in the pathetic pantheon of subprime mortgage losers, Royal Bank of Scotland stands out.

The Edinburgh, Scotland-based bank joined three other titans of global finance - Citi (C, Fortune 500) and Merrill Lynch (MER, Fortune 500) of the United States and Swiss bank UBS (UBS) - in being forced to raise costly new capital after reporting mortgage-related losses reaching into the double-digit billions of dollars. RBS (RBS) said Monday that its latest quarter would reflect nearly $12 billion in writedowns tied to the global credit crunch. Following the script written by its struggling rivals, Royal Bank of Scotland then went out and raised a huge slug of new capital - $23.9 billion worth - at prices far below even the bank's steeply depressed trading price.

But in a bizarre break with the Merrill-Citi-UBS model, in which top execs who oversaw disastrous mortgage investments were forced to resign, Royal Bank of Scotland is standing behind the management team that led the firm into this morass. This despite the fact that the writedowns come just two months after RBS chief Fred Goodwin told investors he didn't expect to have to raise new capital this year through share issuances. Indeed, the board rebuffed Goodwin's offer to resign, Thomson Financial reported. "The board unanimously believes that the executive team has all the ability it needs to steer the bank through this tricky period," Chairman Sir Tom McKillop said on a conference call with reporters.

The market doesn't seem to have reached the same conclusion. RBS shares have lost nearly half their value over the past year, since RBS led a three-bank consortium in the takeover and dismemberment of ABN Amro of the Netherlands. That deal, valued at more than $90 billion, closed just as the markets for risky debt such as mortgage-backed securities and leveraged buyout loans were in the process of freezing over. At the time, though, Goodwin ignored the ill winds in the market and proclaimed that the deal - which cost RBS around $20 billion - would vault the firm to the top of the British banking leagues.

The setbacks come at the end of a long run of big takeovers engineered by Goodwin, who took the reins at Royal Bank of Scotland in 2001. He went on to spend $10.5 billion on Charter One Financial in a deal that substantially boosted the size of RBS' Citizens Financial U.S. unit. The hefty losses now have some critics wondering whether the RBS board has been up to the task of managing the ambitious chief, whose cost-cutting at the Clydesdale Bank during the 1990s earned him the nickname "Fred the Shred."

"Sir Tom McKillop, the chairman, was plainly not up to the job of controlling a chief executive as determined and powerful as Sir Fred Goodwin," Jeremy Warner wrote in London's Independent this week. "As a former pharmaceuticals boss with limited experience of banking, Sir Tom's main qualification for the job seemed to be only that he was Scottish."

But Scotland isn't the sole source of RBS' pain. While Royal Bank of Scotland hasn't been a big issuer of subprime mortgages, it has played with some passion in what has turned out to be an equally dangerous field. The bank's RBS Greenwich Capital unit, acquired back in 2000 when RBS gobbled up U.K. banker Natwest, spent the middle years of this decade beefing up its issuance of collateralized debt obligations. RBS Greenwich's CDO volumes jumped 134% in 2006, the Financial Times reported, putting the bank in the top three underwriters of CDOs based on asset-backed securities. As investors in Citi, Merrill and UBS know all too well, asset-backed securities CDOs have been the source of some of the steepest writedowns in the past year.

Last year, RBS belatedly began cutting back on the CDO business, bidding adieu to co-CDO head Rick Caplan and scaling back the size of the unit. But by then, CDOs backed by billions of dollars in souring loans were already out the door and blowing holes in the balance sheets of investors around the world.

Now, Goodwin is planning to sell the firm's insurance business in a bid to raise even more money and narrow the Royal Bank's focus. And even in the wake of the massive writedowns and humbling capital-raising terms, he insisted on a conference call this week that he's playing a strong hand. "There won't be a fire-sale," he said.

But as RBS shareholders know all too well, Fred Goodwin has been wrong before.