The market is past its panic phase, but a grinding slowdown means Wednesday's rate cut won't be the last one this year.

By Colin Barr, senior writer
For the love of money 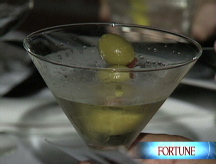 (Fortune) -- The market is eager to see Ben Bernanke heading for the sidelines. But with the U.S. economy softening, he may not stay there for long.

The Federal Open Market Committee concluded a two-day policy meeting Wednesday afternoon by cutting its key fed funds overnight lending target by a quarter-point, as expected, to 2%. Trading in futures markets predicts the Fed will hold the line there in coming months. If the markets are right, the central bank will now go on hold for the first time since it began cutting rates last summer in response to troubles in the credit markets. The shift wouldn't come a moment too soon for some observers.

"Lower fed funds?" wrote Bill Gross, managing director at bond investor Pimco in Newport Beach, Calif., in his May investment outlook. "They would, in Pimco's opinion, likely do more damage than good from this point forward." Gross wrote Tuesday it's imperative that the Fed hold rates steady because "foreign and domestic investors are being fleeced with negative real interest rates, and the weak dollar, stratospheric commodity prices and steadily rising import inflation are the result."

But while surging food and energy prices have stolen the headlines this month, some observers believe falling house prices will force a substantial consumer retrenchment that could turn the Fed's attention back to economic growth. So while the Fed showed Wednesday that it hasn't forgotten that inflation is a concern -- the FOMC's statement this afternoon said that "it will be necessary to continue to monitor inflation developments carefully" -- it could find itself cutting rates again later this year.

"The Fed is very likely going to find a way to signal a wait-and-see approach," Merrill Lynch economist David Rosenberg wrote this week. "That should not, by the way, be confused with an end-of-the-cycle approach."

For now, a pause in Fed action would be a welcome development after months of unrest. In addition to cutting the fed funds rate from 5.25% back in September, the Fed has expanded the scope of emergency loan programs to keep financial institutions lending to consumers and businesses. Since last month's Fed-brokered rescue of Bear Stearns (BSC, Fortune 500), fears of a default at rival brokerages such as Merrill Lynch (MER, Fortune 500) and Lehman Brothers (LEH, Fortune 500) have fallen sharply, judging by trading in the firms' credit default swaps.

But if Bernanke's policies have succeeded in easing the market's liquidity problems, signs of a slowdown in the United States economy have only become more pronounced. Rosenberg points to steep declines in home sales, retail sales and consumer confidence over the past three months. Merrill Lynch now expects second-quarter gross domestic product to fall 2.3% from a year ago, in the first quarterly contraction of U.S. economic output since the 1990 recession.

Rosenberg, who has been saying the Fed will cut its target rate as low as 1% during this cycle, isn't the only one talking about a prolonged slowdown. Merrill chief John Thain made a similar point in the firm's first-quarter earnings call two weeks ago. He said the firm believes the worst of the capital markets dislocation is past, but that related problems could just be coming to light.

"I think the real risk going forward here is how much do all of the problems in the financial and credit markets seep into the real economy," Thain said. "What is the impact of higher energy prices, higher food prices, higher unemployment, and falling home prices on the consumer and what's the impact of that in terms of the U.S. economy and ultimately the global economy?"

More bad news on the home-price front came this week, when Standard & Poor's said prices in 20 major markets dropped an average of almost 13% from a year ago in February. "There is no sign of a bottom in the numbers," said David M. Blitzer, chairman of the Index Committee at S&P. "Prices of single family homes continue to drop across the nation."

Falling house prices are likely to weigh on consumer spending, by preventing homeowners from funding consumption by tapping their home equity. That slowdown makes Dan Libby, a senior portfolio manager of the Sands Brothers Select Access Management fund, skeptical of the prospect that the economy will bounce back fast enough to permit the Fed to hold rates steady for long.

Libby said he believes Bernanke has staved off a deep recession and a market panic by acting as quickly as he did. But he said that he sees little sign that a strong recovery is at hand. While Libby said the Fed doesn't want to repeat its mistakes of the last cycle, when it left interest rates at very low levels even as economic growth picked up, he believes rates could fall to 1.5% before Bernanke & Co. are forced to confront a possible monetary tightening.

"I expect to see a slow, grinding muddling-through type of economy" for the next year or two, Libby said. He added that the Fed must "be careful about sounding too hawkish" when it issues its statement Wednesday laying out how it sees the risks confronting the economy.

That statement is what investors expect to be focusing on at 2:15 p.m. EST, when the Fed announces the results of today's meeting. "What is critical is what signal the Fed provides in the press statement," Rosenberg wrote this week, "and how much emphasis they put on inflation."