The cable giant is hoping that a new wireless broadband network will give it a leg up in a tough market. 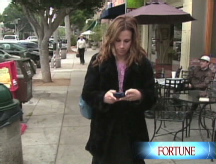 (Fortune) -- As the bloody battle over subscribers between Comcast (CMCSA, Fortune 500) and its phone and satellite rivals continues at a virtual draw, the cable giant is looking ahead to a new wireless broadband arena: WiMax.

The Philadelphia cable shop posted in-line earnings, and once again lost basic video customers - 57,000 in the first quarter. The slide in Comcast's core business however was offset by gains in its phone and Internet subscribers. Comcast added 592,000 new phone users and 492,000 more cable modem subscribers.

Now Comcast is plotting a bold move into wireless broadband via WiMax.

Intel and Google want to invest in a new generation of wireless devices that use their chips and Net applications. Comcast and Time Warner Cable see the fast wireless network as a key part of their product lineups.

"WiMax makes sense for them, it's the right strategy," says JPMorgan analyst Jon Chaplin. With 14.1 million Internet subscribers, Comcast is one of the largest broadband service providers in the country. Moving in to wireless broadband is a no brainer, since it would give Comcast the ability to layer features like mobile Internet calling services.

One big problem is financing. Comcast will have a hard time convincing investors that after years of heavy spending on cable upgrades, the company now has to raise more money and take on more debt to fund this wireless venture.

On an earnings conference call with analysts Thursday, Comcast executives confirmed that they "hired some folks to help us in our wireless thinking." And as for the risk to its credit rating and future financing, the executives said: "We are going to be very disciplined in our capital structures, and do things that make a lot of sense."

Some observers expect Comcast to strike a deal with the WiMax venture and then go to the bond market to seek the necessary cash.

The timing of this deal seems to be impossible to pinpoint. The on and off again discussions have reached advanced stages at several points in recent weeks, say people familiar with the talks.

Google has wavered at times, but the other partners have remained committed. Each member of the unwieldy group has, at various points, tried to sharpen its advantage, these people say.

For a regional player like Comcast, they key will be to get a nationwide network built and to keep it in agreeable hands.

Observers say that the WiMax deal could happen as early as next week.