Why 'Iron Man' will outmuscle the 'Hulk'

Marvel's 'Iron Man' is about to become a Hollywood superhero - and crush the Hulk at the box office. 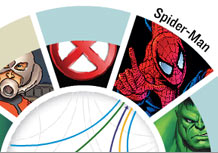 Six degrees of Spider-Man
Can the likes of Iron Man and Thor hope to make the kind of money their buddy Spider-Man has?
Explore

NEW YORK (Fortune) -- On Friday, Marvel Entertainment releases "Iron Man," the saga of Tony Stark, a hard-drinking, amoral war-profiteer who redeems himself by donning high-tech armor and trouncing bad guys. Marvel is in the midst of a similar redemption.

As you may recall, the comic book publisher went bankrupt more than a decade ago. It resurrected itself when it morphed into a licensing powerhouse and signed Spider-Man over to Sony (SNE), which then turned your friendly neighborhood Web-slinger into one of Hollywood's most valuable franchises. But that's the first half of the Marvel saga.

Now the company is producing its own movies, and "Iron Man" is the first. The good news for Marvel is that "Iron Man" is likely to be a smash. Steve Mason, a theater owner and oft-quoted pundit, predicts a $103 million opening weekend for the film. "Marvel stockholders should be very happy in the near-term," he wrote on Thursday. "Numbers like that will certainly guarantee a couple of Iron Man sequels."

Here's the bad news: Even if "Iron Man" delivers scorching results, it isn't likely to sway some Wall Street analysts who are doubtful about the long-term prospects of Marvel's in-house studio. On June 13, Marvel will unveil the second of its two movies for 2008, "The Incredible Hulk." Plagued by negative buzz, this one looks like it could flop.

Unfortunately for Marvel (MVL), not all superheroes become movie stars. "Iron Man" was never as good a comic book character as the Hulk. Tony Stark first appeared in 1963 in "Tales of Suspense No. 39" as a scourge of global communists. But as the sixties wore on, "Iron Man" seemed at odds with the times. Not enough people wanted to read a funny book about a superhero who was secretly the CEO of a weapons manufacturer -- certainly not when the nation was being torn apart by the Vietnam War. So "Iron Man" became a B-list hero in the Marvel Universe.

By contrast, the Hulk became an iconic comic book character when he first appeared in 1962. Few comic book fans could resist the tale of scientist Bruce Banner, whose overexposure to gamma rays cause him to become a raging green monster even stronger than the Fantastic Four's rocky-skinned Thing. The Hulk went on to appear on Saturday morning cartoons and a campy network television starring Bill Bixby as Banner and bodybuilder Lou Ferrigno as his frightening alter ego.

The big screen hasn't been as kind to the green monolith. In 2003, Universal released "The Hulk," a stylish, but gloomy movie directed by Ang Lee, who later won an Oscar for "Brokeback Mountain." The film, which cost $150 million to produce, took in a mere $132 million in U.S. ticket sales and fared even more poorly internationally. Now Marvel has to draw disappointed Hulk fans back to the theaters.

That's going to be difficult. "The Incredible Hulk" has been plagued by infighting. Marvel hired the famously temperamental Edward Norton to play Banner and to rewrite the script. By all accounts, the star clashed with the higher ups at Marvel. Now he isn't participating in the company's publicity drive for the movie.

Meanwhile, "Iron Man" is getting ready to enjoy the kind of adulation he never received in comic land. The movie's director, Jon Favreau of "Elf" and "Swingers" fame, has turned Tony Stark from a cold warrior to a conflicted participant in America's war on terror. He discovers his company's weapons are being used by the bad guys against American troops and changes his ways.

Marvel also shrewdly cast actor Robert Downey Jr. in the lead role. This is Downey's biggest role since his much-publicized battle with drugs. So, perhaps not surprisingly, the actor has been eager to promote the movie. The result has been a flurry of magazine cover stories on the eve of the "Iron Man" opening. ("The jail time, the lousy movies, the sense that the only thing larger than Robert Downey Jr.'s talent is his appetite for self-destruction...Those days are gone," GQ recently gushed.)

If only Norton was doing the same. He's not helping The Hulk's latest movie bid.

Next year, Marvel plans to make one superhero movie. It hasn't announced the character yet. But Michael Pachter, an analyst at Wedbush Morgan, strongly suspects it will be "Captain America," the former Nazi fighter. Most comic book lovers would probably agree that "Captain America" is an even better character than the Hulk. Uh oh.