Internet whiz Jake Winebaum talks for the first time about building, selling and leaving one of the priciest names in Web real estate. 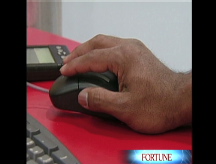 LOS ANGELES (Fortune) -- A huge media meltdown that hasn't drawn much notice from the peanut gallery has been the stock trajectory of publicly-traded Yellow Pages companies, led by former high-flier R.H. Donnelly (RHD).

In the past year, its shares have plunged 95% on worries about the company's hefty debt load, a softening economy, and investor worries about whether the door-stopping printed directories it has gobbled up are going the way of the drive-in movie theater or the eight-track player (a familiar refrain these days). But we're not here to praise or bury the phone book. Rather, what caught my eye was the recent departure of Jake Winebaum, the former head of Donnelly's Internet efforts that are aimed at preventing precisely those worries from coming to pass.

Last summer, Winebaum and his backers sold Business.com, a company they founded at the height of the dot.com boom, to Donnelly for the handsome sum of $345 million in cash. As part of that deal, Winebaum agreed to take on the role as Donnelly's chief Internet guru. At that time, in August, Donnelly was worth more than $3 billion. Today, the whole company's market cap is worth less than what it paid for Business.com - $338 million at Thursday's close of $4.91. Ouch.

There is a small cadre of people - okay, maybe it's just me - who have been fascinated by the many machinations of Business.com over the years. It is, in some ways, a story of the little URL that could, and a reminder that the Internet is a kind of virtual field of dreams: If you build it, a business model will eventually come and maybe someone will eventually buy your baby. Or maybe it's also a virtual box of chocolates - you never know what you'll get.

Business.com's bold-faced footnote in history is that Winebaum and associates purchased the domain name in late 1999 for an unprecedented $7.5 million - a factoid he calls "the albatross around our neck."

At that time, Business.com was part of an "incubator" - remember that word? - called Ecompanies set up by Winebaum, a former head of Walt Disney's (DIS, Fortune 500) Web operations, and partners. At first, Business.com's ambition was to be a kind of Yahoo (YHOO, Fortune 500) of business - a sprawling directory of business information. In other words, type in a company or executive's name or ticker symbol, and pages of relevant information would pop up, some original and some linked to other web sites. The plan drew some big names as early investors, including Britain's Pearson (PSO), owner of the Financial Times, McGraw-Hill, (MHP, Fortune 500) publisher of BusinessWeek, and publisher Reed Elsevier (RUK).

The problem, of course, was that the bubble soon deflated and there wasn't enough online display advertising to support the concept. In early 2002, Winebaum laid off most of his employees and pursued a new business model geared to the emerging practice of paying by the click for advertising and setting prices via auction.

The new direction worked well enough for Business.com to survive and grow. Today it mainly refers people to other places around the Web, including its own sister site Work.com. It also distributes ads it sells among a network of outside sites including Businessweek.com and Forbes.com.

Business.com's own content is workmanlike and, if my limited experience is an indication, not necessarily up to date. I searched my employer, Time Warner (TWX, Fortune 500), and Business.com's company profile listed "G.M. Levin" as the current CEO - he left five years ago - as well as the company's old headquarters address. Similarly, Michael Eisner is still heading the Walt Disney Company on Business.com.

When Winebaum and his backers decided to put the company up for sale last year, several groups including Dow Jones and the New York Times Company (NYT) took a serious look. Donnelly made the most sense, though, because its challenge is to figure out how to convert its traditional business of selling Yellow Pages ads on a piecemeal basis to an online model deploying more complicated search abilities, auction-based pricing, and click-based revenue. "They are developing the next generation Internet Yellow Page site for us," Donnelly CEO Dave Swanson told me yesterday.

Winebaum's swift departure was earlier than his new boss expected. But Swanson said, "I didn't get completely blindsided" because he was warned of buying businesses from entrepreneurs. "When they suddenly get their payday, life looks a little different to them."

"Look," he added, "we didn't buy Jake Winebaum, we bought the team and the team is intact."

Speaking for the first time publicly since leaving Donnelly, Winebaum also says his exit wasn't directly linked to Donnelly's larger marketplace woes. Rather, he said, it was the growing realization that his position would require a huge commitment of energy, time, and travel, and he wanted to spend more time with his family - he lives in Los Angeles and Donnelly is in North Carolina. (And, not surprisingly, he says he has another startup in the works in a very different field.)

Winebaum declined to say how much he personally netted from the sale of Business.com, but it was disclosed that as part of the deal he bought $9 million of Donnelly stock from his proceeds as a show of his commitment to coming on board with the new owners. His Donnelly shares are now greatly diminished, but that doesn't seem to have darkened his view either of where his baby ended up or his departure.

"I'm very proud of having stuck with it - more so than having made money doing it," he says. "We sort of toiled away, very much under the radar, and built a nice business."

As for that famously pricey Web address, he believes its worth has been proven. "If you're going to be a business brand on the Internet, Business.com is not a bad name to have."