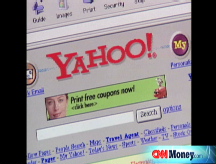 The stock recovered a bit later in the day and was trading at about $24.25, down about 15%, as of mid-afternoon. The sell-off comes two days after Microsoft Chief Executive Steve Ballmer walked away after the two companies were unable to reach an agreement.

Microsoft (MSFT, Fortune 500) announced its blockbuster bid in late January to purchase the company in a nearly $45 billion offer. Yahoo demanded a higher price, saying the company was "severely undervalued."

The three-month saga ended Saturday when Yahoo (YHOO, Fortune 500) refused a sweetened offer by Microsoft, to $33 a share from $31 a share. Yahoo's board signaled that they wanted closer to $37 a share.

At stake is Microsoft's and Yahoo's ability to compete with Google (GOOG, Fortune 500) as billions of advertising dollars continue to flood the Internet.

Microsoft saw Yahoo, one of the last independent Internet companies with massive scale, as its best chance to catch up with Google, the dominant player in online search.

Some Wall Street analysts and shareholders also considered Microsoft's bid as the best option for Yahoo. "Yahoo has a long way to go to get to [the price point that] Microsoft just offered," said Ralph Kelmon, CEO of Kelmoore Investments which has a minor stake in Yahoo. "I'm predicting [Yahoo's] future is a little tough. I don't see the magic."

Other fund managers harshly criticized Yahoo CEO and cofounder Jerry Yang. "I'm certainly not celebrating," said Darren Chervitz, a manager of the Jacob Internet Fund, which owns Yahoo shares. "This is a clear example where the management didn't have the best interest of the shareholders at heart. I think a lot of shareholders would have been very happy to do this deal at $33."

Chervitz thinks Yang let his personal animosity toward Microsoft get in the way of a sound business deal. "I truly feel that Yahoo's management, particularly the CEO, had approached this as a undesirable outcome," said Chervitz. "From Jerry's point of view, he's the founder of the company and has a desire to leave a legacy."

Chervitz joined other Yahoo investors, among them noted value manager Bill Miller, in calling on Yahoo to buy back shares. "If [Yang and company directors] really think Yahoo is worth $37, then $24 is a steal," said Chervitz.

Searching for a new partner in Google?

For its part, Yahoo has signaled that it will pursue other avenues and may even outsource some of its search advertising to Google to help boost revenues.

Jeffrey Lindsay, an Internet analyst with Bernstein Research, thinks that would be a smart decision. In fact, he was calling for a Google partnership before Microsoft announced its bid.

"We've been saying this since September. If Yahoo wants to remain independent, they should outsource search to Google," said Lindsay. "Yahoo wasted a lot of time in the last two years slashing away at Google. While they were busy doing that, they missed out on [acquiring] MySpace, YouTube and Facebook."

With Microsoft's withdrawal, some say a Google partnership is even more imperative.

"Our view is that YHOO does not have any viable near-term alternatives, especially the ones that have potential to bring YHOO's stock back in late $20s to early $30s," wrote Collins Stewart analyst Sandeep Aggarwal.

Google and Yahoo last month finished a two-week test in which a small number of Google's search ads ran on Yahoo's homepage. Both Google and Yahoo executives said the test run was a success and are considering a long-term partnership.

Citigroup analyst Mark Mahaney estimated in a report Monday morning that the deal could bring in an additional $1 billion in cash flow, or the equivalent of about $6 a share, to Yahoo.

In turn, the money could be used for Yahoo to make strategic acquisitions or focus on other markets like foreign language search or mobile search where there is no clear leader, Lindsay argues.

"Outsourcing to Google doesn't mean that Yahoo is no longer a tech company. It just means they are not a search company. This is something everyone knew back in 2004, and Yahoo just figured it out," Lindsay said.

Yahoo has spent millions trying to catch up to Google in search, to no avail. Yahoo rolled out its long-delayed Panama search system last year, but so far hasn't been able to make much of a dent in Google's market share.

Google commands 58.7% of the lucrative search business compared to 18.1% for Yahoo and 12% for MSN, according to the latest data from Nielsen//NetRatings.

But even if Yahoo strikes a deal with Google, some say Yang and co-founder David Filo made a big mistake refusing Microsoft's offer.

"We believe Yahoo! will focus near-term on proving to shareholders/constituents that it made the right decision rejecting Microsoft's bid [we don't think they did]," wrote UBS analyst Ben Schachter in a report.

Why Microsoft caved (for now)