Yahoo in faceoff with Icahn

By Yi-Wyn Yen, writer
Icahn in the middle 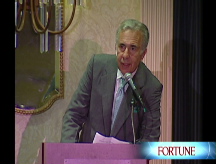 NEW YORK (Fortune) -- Carl Icahn is picking up where Microsoft CEO Steve Ballmer left off. And Yahoo is still digging in its heels.

Icahn, the billionaire corporate raider, launched a battle for control of Yahoo's board of directors in the hopes of forcing a sale to Microsoft. In a letter to Yahoo (YHOO, Fortune 500), Icahn said he would nominate 10 directors to replace Yahoo's existing board at the company's annual meeting in early July. Shareholders have until the end of the day Thursday to nominate an alternate slate.

The move adds a new twist to the fight for Yahoo, which kicked off in early February when Microsoft (MSFT, Fortune 500) announced a blockbuster $44.6 billion bid for the Internet portal. Months of jockeying between the two companies ended in early May when Microsoft walked away after Yahoo CEO Jerry Yang rebuffed a higher bid valued at $47.5 billion.

Yahoo, in an open letter to Icahn Thursday evening, essentially held its ground. "Your letter reflects a significant misunderstanding of the facts about the Microsoft proposal," the Yahoo note to Icahn reads. "Yahoo's ten-member board...remains the best and most qualified group to maximize value for all Yahoo stockholders."

In effect, Icahn is attempting what Ballmer had publicly threatened to do: try to overthrow Yahoo's board of directors in the hopes of brokering a buyout by Microsoft. But Ballmer backed away from a proxy contest because, he concluded, a drawn-out war would be too damaging.

Icahn now faces two key challenges: Lining up support among Yahoo's other shareholders and luring Microsoft back to the bargaining table.

Neither hurdle will be easy to clear. Icahn needs a majority of shareholders to vote in favor of his new slate, which includes tech entrepreneur Mark Cuban and former Viacom CEO Frank Biondi. He disclosed Thursday that he's recently acquired a roughly 4% stake in Yahoo, and that he's looking to own up to $2.5 billion worth of shares.

Yang and Yahoo co-founder David Filo, meanwhile, hold 10% stakes and other top executives and directors each own 5% of the company. Presumably, as the latest letter indicates, these shareholders will oppose Icahn, which means he needs the support of hedge funds and institutional shareholders.

It's not yet known which way the major investors will vote. Fund managers at Capital Group, which is Yahoo's largest single shareholder, with a 16% stake, have signaled that they supported Yang's quest for a higher bid. Miller of Legg Mason, which holds a 6% stake, isn't certain he will go along with an Icahn proxy fight if Microsoft is no longer in the game.

But Yahoo shareholders are likely to listen to Icahn's pitch, says Darren Chervitz, a manager for Jacob Internet Fund, which holds a minor Yahoo stake. "[Icahn's campaign] is certainly a good idea and he's put together a qualified slate," says Chervitz. "I think he'll get a receptive ear from shareholders, including ourselves."

So far, Ballmer and other Microsoft executives have said they have no plans to restart talks, despite the fact that many analysts see Yahoo as Microsoft's best shot at competing with Google (GOOG, Fortune 500). Icahn reportedly has tried, unsuccessfully, to gauge from Microsoft its interest in renewing a Yahoo pursuit.

Besides, some Wall Street analysts don't believe Microsoft is finished with Yahoo. "We think Microsoft may still be interested [in Yahoo] as, in our view, it needs Yahoo! to compete vs. Google," wrote UBS analyst Ben Schachter in a research note Thursday. "We continue to think a deal will be reached."

For its part, Yahoo in its letter stressed that while business is performing well, it would be open to alternatives, including a Microsoft deal, provided the price was right. "We have been crystal clear in our stance that we have been and remain willing to consider any proposal from any party including Microsoft if it offers our stockholders full and certain value."

Yahoo shares are up 8% since Tuesday, when the first report of a possible Icahn move was announced. Microsoft shares are up 1% during the same period.

Doubting Microsoft is a mistake