To feed the world - without destroying it - big companies need to get smart about what they buy.

The human cost of chocolate
Seven years after the industry agreed to abolish child labor, little progress has been made. Seventy percent of the world's cocoa beans are grown in West Africa, where working and living conditions are brutal and many workers are underage.
View photos
Green eats 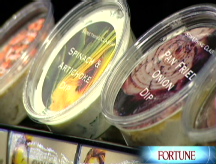 NEW YORK (Fortune) -- Backyard vegetable gardens are fine. So are organics, slow food and locavores - people who eat produce grown nearby. But solutions to the global food crisis will come from big business, genetically engineered crops and large-scale farms.

So, at least, says Jason Clay, one of the world's leading experts on agriculture and the environment. Clay leads a global effort to reform agriculture at the World Wildlife Fund, working with buyers and producers of farm products including Coca-Cola (KO, Fortune 500), McDonald's (MCD, Fortune 500) and DuPont (DD, Fortune 500).

The problem they face has made headlines lately. Demand for farm products - food, fiber and fuel - will keep growing, as the population grows and as hundreds of millions of people move into the middle class and consume more meat and dairy. Global per capita meat consumption has increased by 60 percent in the last 40 years - that's 60% per person. Meanwhile, the supply of farmland is limited. Agriculture already uses 55% of the habitable land on the planet. According to Clay, farming is the single largest threat to biodiversity; what's more, if farmers destroy tropical forests in Brazil or Indonesia to raise cattle or produce palm oil, the impacts on climate change will be severe, because forests store lots of carbon.

"We are reaching the limits of natural resources on the planet," Clay says. The answer is for farmers to become more productive - generating more output from fewer inputs. That requires economies of scale. "Any thinking environmentalist," says Clay, "would want to see more intensification of agriculture."

Clay, 57, is nothing if not a thinking environmentalist. He literally wrote the book on sustainable farming - a 570-page volume called "World Agriculture and the Environment" (Island Press, 2004), which analyzes the production practices and impacts of 21 commodities, from coffee, tea and orange juice to shrimp, cashews and bananas. He grew up on a Missouri farm where his family raised beef cattle and grew soybeans and corn; he was educated as a scholarship student at Harvard, the London School of Economics and Cornell, getting his PhD in anthropology; and he worked as an anthropologist and human rights activist in Latin America and Africa. In the 1980s, he got into the commodities business as a way to help poor people in the tropics; after meeting Ben Cohen at a Grateful Dead benefit, they created Ben & Jerry's Rainforest Crunch ice cream, to create a market for sustainably harvested ingredients from the Amazon.

Today, Clay spends more time with global companies like Unilever (UN) (which now owns Ben & Jerry's) than with hippie-inspired startups. He is pursuing a big idea - that the world's leading buyers of commodities can be persuaded to dig deeper into their supply chains, influence farmers to adopt better practices, and then create global standards so that agriculture can become both more productive and sustainable. He has convened industry roundtables of retailers, buyers, producers and environmentalists with the goal of reducing the key impacts of producing sugarcane, soy, palm oil and other crops.

The Better Sugarcane Initiative, for example, includes Coca-Cola, Tate & Lyle, BP (BP) and Cargill, as well as Unica, a Brazilian industry association. Its goal is to ensure that sugarcane is grown with a lighter environmental footprint, while maintaining or even enhancing the economic status of farmers.

"The idea is to develop better practices and ultimately standards for driving more sustainable production of sugar," says Dan Vermeer, who manages supply chain issues for the Coca-Cola Co. Negative impacts of growing sugarcane, he notes, can include degraded soil, loss of forest land and waste of water. "It's a long way from our operations," he says, "but we feel we are accountable."

Companies are willing to take responsibility for managing the impacts of their supply chain for a couple of reasons, Clay says. They can build long-term relationships with growers, potentially locking in the supply and reducing the transaction costs of buying commodities. And they can protect their reputations.

"The business case is reducing cost, reducing risk and liability," Clay says. One example: Several years ago, Greenpeace attacked McDonald's in Europe for buying chickens that had been fed with soy that contributed to deforestation of the Amazon. In response, McDonald's and Cargill, its supplier, agreed to work with Greenpeace to promote more sustainable ways of growing soy.

Clay argues that only big companies have the leverage to bring big changes to global agricultural practices. Shopping at Whole Foods won't do it and, besides, he says, it's too much to ask consumers to be aware how much water or how many chemicals are needed to produce a hamburger or a latte. He once calculated that a Grande Starbucks Latte - or any brand - has 208 liters of embedded water, most in the water it takes to produce the milk and grow the coffee, although the paper cup, sleeve, lid and sugar all require water.

Even so, consumers, particularly in the developed world, ought to become aware of the environmental impact of what they eat. Personal choices matter, too.

"What would it mean in the U.S. and Europe if the average consumer ate one less meal with meat every week, or just ate smaller portions?" Clay asks. "That would go a long way to solving the current grain shortages around the world. And how many heart attacks do you think it would prevent?"

"The average American pet will consumer more resources than the average African and have better medical care as well," he says. "These are the contradictions of our time."