Musing about The Jeffs

Why a Time Warner-NBC Universal combination is now an enticing prospect.

By Richard Siklos, editor-at-large
Bugs Bunny and the peacock 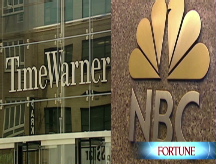 NEW YORK (Fortune) -- For just shy of one month way back in 1995, the Walt Disney Company was poised to become the world's biggest media company after announcing it was buying ABC/Capital Cities. But mere weeks later, Time Warner announced it was buying Turner Broadcasting, putting itself back into the lead dog position among the media pack as measured by revenue, a position it held through its wayward combination with America Online and up to this week.

But in announcing plans to split off America's second largest cable-TV system operator, Time Warner Cable (TWC), to shareholders, the giant is finally shrinking down in an effort to revive its long-suffering share price. The split-off won't happen till the fourth quarter, but if it were to go into effect today, Time Warner (TWX, Fortune 500) would see its market capitalization reduced to around $33 billion from $58 billion, making it considerably smaller than rivals News Corp (NWS, Fortune 500). ($50 billion), Comcast (CMCSA, Fortune 500) ($65 billion) and Walt Disney (DIS, Fortune 500) ($64 billion), which is also, incidentally, poised to reclaim the title as measured by revenue.

Of course, something had to give at Time Warner (which owns Fortune and CNNmoney.com) and new CEO Jeff Bewkes has said that making money is his prime objective, rather than towel-snapping rights around the media mogul locker room. The cable separation is no surprise, nor will it be when Bewkes finally figures out a way to find a suitable new home for errant stepchild AOL, something that has become only more urgent since Microsoft began its dance with Yahoo.

Presuming this gets done, where does this leave the new, slimmed-down, content-centric and lightly leveraged (thanks to offloading buckets of debt on the cable business) Time Warner? Why, ready to go shopping - or get bought itself - of course. Already the company is looking at the Weather Channel and covets assets like Scripps' Food Network and HGTV should they ever come on the market. But among the most logical and enticing prizes - and one that has been rumored about on and off ever since Bewkes' ascension at Time Warner - is NBC Universal.

News that General Electric (GE, Fortune 500) CEO Jeffrey Immelt is looking to sell the company's appliance business and possibly pare its financial services holdings, has given rise to a fresh round of speculation that NBCU (as they call it) is not long for life under the industrial conglomerate, which owns 80% of it with the rest held by France's Vivendi. A lot can happen in the year or so before such a thing could happen, and lord knows there will likely be plenty of other companies looking to do business with one company or the other. This is, after all, the age of recombinant media - as witnessed by the split of CBS and Viacom, the planned dismantling of IAC, the halving of Scripps and Belo, and so on. What makes NBCU and Time Warner uniquely intriguing, though, is that their operations fit together almost too perfectly from a strategic and cost-savings perspective. Plus, imagine the punning possibilities if all top executives stayed involved at first - Bewkes, Immelt, and NBCU's CEO Jeff Zucker, aka "The Jeffs"

What NBCU and the new Time Warner share in common is that they have made the development of cable networks and the original programming that runs on them their core competency. (And until splitting off cable, Time Warner by law is prohibited from owning a broadcast network.) Bewkes earned his stripes running HBO and has spruced up the likes of TNT, TBS and the Cartoon Network. Zucker has taken heat for still not reviving the fortunes of NBC's prime-time schedule, but earned the CEO job a year ago by steering money-spinning cable channels like Bravo, USA, Sci-Fi and CNBC. Time Warner has talked about finding a broadcast news partner and NBC News would fit that bill - though the overlap between CNN and MSNBC and CNBC would be overkill and I'd expect MSNBC to be the odd channel out. Similarly, Bewkes might not want to keep the Universal film studio and theme parks since he already has Warner Brothers, into which he just collapsed smaller studios New Line and Picturehouse. Whether the Time Inc. publishing business would have a place in such a construct would likely depend on how well the business performs over the next year.

Admittedly, musing about The Jeffs is premature, particularly until the "AOL problem" is solved. One big question mark would be the value of either company if they sat down to negotiate a deal. According to analyst Nicholas Heymann of Sterne Agee, NBCU could be worth around $33 billion if sold by GE. But that's what Time Warner's implied value as a content-only company is today - despite the fact that without cable it will still generate operating earnings that are more than double NBCU's. That, in a nutshell, is a big reason for the split: Sanford Bernstein's Michael Nathanson, notes that Time Warner's content businesses trade at a price-to-earnings multiple that is 26% below the S&P 500 and between 12% and 27% beneath its media conglomerate peers. So Bewkes would presumably want to bridge that gap before using Time Warner stock as "currency" in any potential merger. (Imagine the irony if, after going through all this trouble to split off cable, Time Warner stock stayed depressed and the company was instead snapped up by another big distributor like Comcast or AT&T.)

Meanwhile, Immelt reaffirmed yet again this week that he is still pleased with NBCU. But make no mistake - though size may not matter as much any more, this is the stuff that gets jawed about in the locker room.