The oil giant is thriving, but the Rockefellers, corporate reformers and environmentalists want fundamental change at its annual shareholder meeting Wednesday. 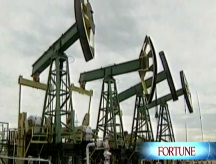 NEW YORK (Fortune) -- It's hard to imagine why ExxonMobil shareholders are so unhappy. After all, the world's largest publicly-owned energy company rode the surge in oil prices to a record $40 billion in earnings last year, making it by far the most profitable Fortune 500 company. Shares are up 10% in the last year, while the S&P500 has fallen by just as much.

But disgruntled shareholders want more - a lot more. They want ExxonMobil (XOM, Fortune 500) to overhaul its management structure, promote renewable energy, help solve the problem of global warming, support its gay and lesbian workers, and to oppose a ban on women members at the Augusta National club, home of the Exxon-sponsored Master's golf tournament.

The growing discontent should make for a good show at ExxonMobil's annual shareholder meeting Wednesday in Dallas, where 19 shareholder resolutions are on the ballot. Granted, shareholder proposals aren't binding, but this year ExxonMobil's disenchanted investors have a key ally: Descendants of John D. Rockefeller, the founder of Standard Oil, which evolved into ExxonMobil, who are deeply unhappy about the company's direction.

The Rockefellers own less than .01% of ExxonMobil shares, but their powerful name and ability to generate bad press have already created problems for management. Last month the family came out publicly with a list of grievances, chief among them fears that the company isn't doing enough to battle global warming or tap new sources of oil.

The company is doing well now, write descendants Peter O'Neill and Neva Rockefeller Goodwin in a recent letter to shareholders, but is "struggling to replace its oil reserves" and isn't doing enough to find new ones. They also argue that the company is ill-prepared for "global policies aimed at curbing carbon dioxide and diversifying energy supplies."

On the issue of capital investment, the Rockefellers might have a point. Chevron (CVX, Fortune 500), Shell (RDSA), and BP all invested more than 50% of their cash flow in capital expenditures last year, according to PFC Energy, a global energy consulting firm. Exxon invested 26% and spent much, much more than the other majors paying dividends and buying back shares.

"Chevron, with half the cash flow of ExxonMobil, is reinvesting roughly the same amount of money," says Robin West, chairman of PFC Energy. "That says they have dramatically different strategies."

Concern about ExxonMobil's growth strategy is one reason the Rockefellers want the job of chairman and CEO split in two. The family argues that an independent chairman will serve as check on current chairman and CEO Rex Tillerson. A resolution calling for an independent chair won 40 percent of the shareholder vote last year and the Rockefeller support (and attendant publicity) could deliver a majority.

ExxonMobil counters that there's no need to split the CEO and chairman job. Ten of the 11 directors to be elected Wednesday, the company notes, are independent.

There's a bigger reason investors are going after ExxonMobil: the environment. Public pension funds and environmentalists argue that the company is on the wrong side of the climate-change debate, and that shareholders will ultimately pay the price.

Unlike BP (BP), Shell and Conoco-Phillips (COP, Fortune 500), ExxonMobil does not support federal regulation of greenhouse gases. (Worse, in the view of the enviros, the company for years financed groups that pooh-poohed global warming.) Unlike the other big oil companies, ExxonMobil has not invested billions in high-profile renewable energy ventures, like BP's solar business or Shell's wind energy play.

Mindy Lubber, the president of an environmental group called Ceres and director of the $5 trillion Investor Network on Climate Risk, says coping with climate change will require a "radical transformation" of the global economy. "Not preparing for that transformation, which is real, is not preparing a company for long-term risks," she says.

ExxonMobil says the environmental resolutions up for vote Wednesday are overkill. The company argues that it is making sensible, long-term investments in efficiency and alternative energy, including its support for research into next-generation solar, biofuels, hydrogen and lithium-ion batteries. What's more, the company argues, because no one knows how greenhouse gases will be regulated in the future, it is "impossible today to assess the potential implications for shareholder value from initiatives to address climate change."

Here, ExxonMobil has a point. Maybe ExxonMobil has avoided big bets on wind or solar energy because it doesn't think they will pay off. Maybe the company thinks the best use of its profits, given the alternatives, is to return cash to shareholders. Because of its financial discipline, ExxonMobil's return on invested capital has averaged about 28% over the last five years - better than its peers.

You can argue that ExxonMobil's actions aren't good for America. We need investments in renewable energy. We also need more oil, so that we are less reliant on foreign sources of oil. But it's harder to argue that the company isn't serving its shareholders - at least in the short run.

First Published: May 27, 2008: 11:56 AM EDT
American Airlines loses $3.3 million a day
Hunting for oil beneath the ice
Photos: Drilling for oil in the Arctic
Oil shale may finally have its moment