The search-engine giant is tops on new MBAs' wishlists, according to a new survey, though consulting and financial services firms remain popular. 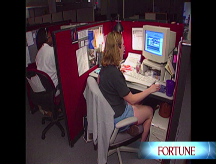 NEW YORK (Fortune) -- Where do MBA students most want to work when they get out of school? Investment banks and consulting firms are still popular choices, but for the second straight year, the most coveted employer is Google, a recent survey found.

Asked to name five employers they'd most like to join after graduating, 23.65% cited Google (GOOG, Fortune 500), according to the poll of 5,769 students at 52 business schools by research firm Universum Communications in an exclusive Fortune.com list.

Google has become "a worldwide name, it is global, and it recruits only the best," said Claudia Tattanelli, CEO of Universum North America. And with perks like free gourmet food, time to work on independent projects and talks with visiting authors, the search-engine giant "has revolutionized how employees are treated," she said. "They are famous for keeping employees happy."

Last year, Google hired hundreds of new MBAs, though thousands applied. MBAs are attracted to Google because they "really get a lot of responsibility right at the outset," said Yvonne Agyei, Google's director of global university programs. "MBAs are looking for the opportunity to make an impact."

Universum's survey measures where MBAs would like to work, not necessarily where jobs are available. The job market for MBAs feels tougher than last year, although students certainly continue to get offers. But b-school students are "casting a wider net," considering jobs they may not have considered in a stronger market, said Tattanelli.

In fact, according to a different survey that included students in college and other graduate programs as well as MBAs, 50% of respondents graduating this year say they have received one or more job offers and 37% have accepted, according to online career research firm Vault.com, which conducted the poll. Of those who don't yet have an offer, 44% are "very worried" and 42% "somewhat worried" about getting jobs. Of those with jobs lined up, 22% reported having to compromise on salary, title, benefits and perks.

Not surprisingly, apprehensive MBA students are working even harder at their summer internships, hoping to impress hiring managers there, recruiters and placement officers said. They're also asking probing questions of recruiters to make sure a job they're offered won't be eliminated and considering jobs at companies or cities they might not have considered in a stronger market.

"I think that now, a lot of grads have had to take a plan B approach," said Andy Chan, director of the career management center at the Stanford Graduate School of Business.

Meanwhile, the Bear Stearns (BSC, Fortune 500) mess hurt some MBA job opportunities. In fact, 40% of b-school students who were hired by the investment bank for summer internships or full-time positions this year had their offers rescinded after JPMorgan Chase (JPM, Fortune 500) agreed to buy the firm in March, said Brian Marchiony, a JPMorgan spokesman. Nevertheless, Bear Stearns managed to rank no. 76 on this year's list, down from no. 46 last year, due to a quirk in the survey timing -- students were asked to respond between January and March, and many results came in before Bear's woes were known.

Meanwhile, smaller firms, companies with strong retail brands, and even some government agencies are moving up the rankings.

This year, the CIA ranks no. 37, up from no. 74 last year. Meanwhile, the FBI is in 47th place, up from 89 last year. And among women MBAs, the Department of Defense - Missiles and Weapons Division ranks No. 99.

As so-called millennials start to get their MBAs, more are saying they want to use their degree to contribute to society, Tattanelli said.

B-school students have been showing more interest in the 'cleantech' industry, sustainability technologies, and firms that make social responsibility a priority in their business strategies, Chan said. "This generation of students wants to make a difference in the world," he said.

Nevertheless, MBAs clearly still care about the size of their paychecks.