One tip for candidates who want to avoid making a faux pas: Leave your cockatoo at home. 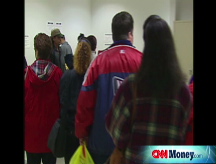 More Videos
Find the right company for you
What qualities are you looking for in a great employer? Use our tool to find the companies on our list that suit you best.
SEE ALSO: Perk-Finder
Select the perks you want and see instantly which Best Companies to Work For offer them.
Find my top perks

(Fortune) -- Folks, with layoffs mounting, gas prices surreal, mortgage defaults on the rise, the stock market in a swoon, and much of the U.S. staggered by truly awful weather of one kind or another, we could all use a good laugh right about now. So how about a look at the results of a new poll of hiring managers, by staffing firm OfficeTeam (www.officeteam.com)? The firm's researchers spoke with executives at 1,000 big U.S. companies, plus 100 in Canada, and asked them to recall the most embarrassing or bizarre interview moments they had witnessed or heard of. A sampling of their answers:

"The person was dancing during the interview. He kept saying things like, 'I love life!' and 'Oh, yeah!'"

"One job applicant came in for his interview with a cockatoo on his shoulder."

"The candidate sent his sister to interview in his place."

"The candidate stopped the interview to ask me if I had a cigarette."

"We had one person who walked out of an interview straight into a glass door. The glass shattered."

"The candidate got his companies confused and repeatedly mentioned the strengths of a competing firm, thinking that was who he was interviewing with."

"A guy called me by the wrong name during the entire interview."

"We're a retail company, and when we asked the candidate why she wanted to work for us, she replied that she didn't want to work in retail anymore."

"An interviewee took his bubble gum out of his mouth and held it in his hand. Then he forgot about it and shook hands with me."

"A job seeker gestured with his hands so much that he then sat on them to stop it."

"A candidate fell asleep during the interview."

"An applicant was doing really well in the interview until we got to the question about why she had left her previous job. She told us everyone there was out to get her."

"A candidate insulted the interviewer's tie."

Okay, so these are obviously dumb moves - but what if something happens that falls into the category of plain bad luck? A few of the hiring managers in the survey mentioned candidates who suddenly fell ill during an interview. One hapless candidate had cut his lip shaving (alas, the cut opened up while he was talking and bled throughout the interview - ouch!).Interviewees have also been known to spill coffee on themselves or others.

"Handling problems gracefully may actually impress interviewers," notes Dave Willmer, OfficeTeam's executive director. "But if the situation can't be overcome, move on and focus on the next opportunity. It's a learning experience that will someday make an entertaining story." If you can bear to recall it.

Readers, what do you say? What was the most surprising or weird thing you ever did -- or witnessed -- in a job interview? Post your thoughts on the Ask Annie blog.