The world can feed itself, says Deere CEO Robert W. Lane, through trade and technology. 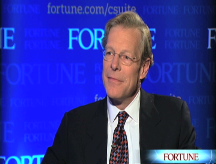 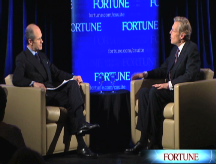 (Fortune Magazine) -- No question: It's been a long time since the American public was fascinated by farm news. But with sticker shock at the checkout, the passage of a controversial $300 billion farm bill, and the increasingly skeptical coverage of the ethanol boomlet, people sure are interested now. Such news turns a spotlight on Deere & Co. Founded in 1837, it is the world's largest maker of farm equipment and a major builder of construction equipment (2007 revenues: $24.1 billion).

Since Robert W. Lane, 58, became CEO in August 2000, the overall stock market has been flat, but Deere (DE, Fortune 500) shares have quintupled. As befits a man who leads a company based in the heart of the heartland - Moline, Ill., is about three hours west of Chicago - Lane favors an understated Midwestern sensibility. But he is, in fact, one of America's top-performing CEOs. He talked recently with Fortune's Geoff Colvin about the price of food, the future of U.S. manufacturing, the power of ordinary talent, and much else. Edited excerpts:

The U.S. economy is struggling, but the farm economy is booming. Why?

There is some wonderful news from a humanitarian point of view. About a quarter of the world's population lives on between $1 and $2 a day, and most of those people are moving up. When you move up in that range, you start eating better. That's the No. 1 issue. A growing population that has money to buy food is impacting all crops - rice, wheat - far beyond corn. There is an impact from corn ethanol, but it's a small impact compared with the demand from global growth.

The normal market response would be production increases. Do you see that happening?

We do. The irony, though - and this is where trade is so vital - is that the places with great population growth are not ideal for high-production agriculture. Places like Brazil, Ukraine, Kazakhstan, Russia, Australia, Canada, the U.S., parts of Eastern Europe - these are the breadbaskets of the world.

So we'll feed everybody.

Every indication is that the dramatic increase in yield, which we've already experienced, will continue and maybe even accelerate.

You've said Brazil may be the best prospect for big increases in agriculture.

In the short term that will be true, because they are ready. After that, there are the former Soviet Union countries - southern Russia, Turkmenistan, Kazakhstan. Some of the greatest soil in the world is in southern Russia. Sadly, many of these places are still suffering from what happened under Stalin in terms of the fundamental structure of agriculture and of land ownership. They don't have equipment; they are importing our equipment as much as they possibly can. I was in the Urals a few weeks ago seeing our huge seeding equipment being pulled across these lands.

Is China a market or a competitor for Deere?

Both. It is a market for our products. We manufacture combines and tractors there, we just bought a tractor company there, and we build transmissions there. But the big market is for our customers' products - that is, our customers in Brazil, Ukraine, Kazakhstan, and so on, selling into China. As a competitor, yes, we will see product from China around the globe. We hope it has the Deere name on it.

In India, a huge market, Deere has competition, in particular from Mahindra & Mahindra. How is that going to play out?

Ten years ago I was walking over an empty field in the Pune area [south of Mumbai], wondering, "Could we really build a factory here?" Today we are exporting to 55 countries, including the U.S., out of that factory. We respect our Indian competition. But we are the largest exporter of tractors out of India and have been for a number of years now.

Will manufacturing heavy equipment with a unionized labor force in the U.S. continue to make sense?

Yes, in conjunction with all the other investments we're making around the world. Over the period that I have had the privilege to lead Deere, we have totally redone our investment in Waterloo, Iowa, for example; it's now very modern, very capital-efficient. And that is in conjunction with our investments in Brazil, India, China, and Russia. So it's a concert of investments that ultimately make sense. Very high productivity is required in the U.S. The UAW people are working very effectively with us. It's a highly educated workforce, which is one of the most important issues the country faces to keep manufacturing going.

Can you continue funding the health care of your employees and retirees as you have been?

The key words are "as we have been." We have made a lot of progress working with our fellow employees who are members of the UAW. They have already made arrangements with us that are advantageous to the company in terms of post-retirement health care. It's a very productive working relationship. It requires a great deal of flexibility on their part, and they've been giving it. They're working very hard to make us competitive, and we are rewarding them for their competitiveness when they produce it.

You make tractors that steer themselves. What makes that possible?

These are highly productive mobile information machines. I was in Nebraska a few weeks ago when a technician mentioned that he'd gotten a call from a producer who said he could not farm because his auto-steer was down. Two years ago they didn't even have this, and now they can't farm without it! But one of the reasons is that it's so productive for them. This is not like a GPS in your car, where it's nice to know where you are. This is directing the machine. It's optimizing. No human being can go back and forth for 15 hours and not overlap or leave a gap. All of that is eliminated waste.

We are at a huge transition to intelligent machinery, from planting and spraying to harvesting at the optimal time to fewer chemicals being applied to much smarter use of seeds.

That's very true. The robotics of the machines are very exciting in terms of what they ultimately can do - and of course they produce more yield from the land. We want to be good stewards of the land, and machinery can play a big role in that.

Deere just bought an irrigation company. Do you see a big opportunity there?

About 70% of the fresh water in the world is related to agriculture. There could be more wars fought over water than over oil in this century. It may be the ultimate scarce resource. There are alternatives to oil for energy. There's no real alternative to fresh water. When that much water is going into agriculture, who better to work on the subject than us? So we are building John Deere water technologies; John Deere renewables, with our wind-power investments; John Deere landscapes; and mobile information technologies.

Deere is a major maker of construction equipment. How do you see the U.S. homebuilding business?

At the moment it's very bleak. We're at a low, but we will adjust. We've had significant downturns before. This is steeper than before, but if you go back to '81 or '91, there have been periods like this.

When you became CEO, you had an idea that you called "shareholder value added." The generic term is "economic profit." Why did you go in this direction?

We were very asset heavy [in 2000]. We have since figured out how to do our business with dramatically fewer assets. This has thrown off a great deal of cash, and that's the reason the owners of the company have been rewarded.

So you measure the amount of capital used, product by product, and impose a charge on the managers of each business for the capital they use. They have to exceed that charge before they can report any profit internally.

That's exactly right. Everything is about the kind of capital that it takes to produce the profit. We have tried to do this in a way that all of our operating managers could understand. We made it very simple: a capital charge of 1% a month, 12% a year. It's not a perfect number, but it's easy to understand. And every asset has that charge. So a breakeven number means you're already earning 12%, which is not bad.

That was a revolutionary change in a very old company. What did you learn from it?

Most of our employees are, like me, ordinarily talented. We're not geniuses, most of us, though fortunately there are a few. The No. 1 lesson is, when you get an entire team of ordinarily talented people pulling together, it's awesome what can be accomplished. This entire worldwide workforce [about 52,000 people], almost 50% of it outside the U.S., is pulling together to implement this concept. This is an enormous capability. We're looking for sustained, long-term economic profit. Once the goal is clear, the assets come out and the innovation comes in.

What did you learn about how to effect change?

Deere has a wonderful group of employees, and it was persuading them that this was the way we were going to serve our customers. And in the process of serving customers distinctively well, we were going to fatten up their wallet, which was nothing to be ashamed of. We had to explain why we were so asset heavy, what we did wrong. I did a lot of explaining with charts. Many people didn't realize how poorly we had been performing [as a business].

There were lots of wonderful things about Deere: a tremendous history of integrity, quality, a dealer organization second to none, a great employee base. But we were just an okay business. It was the one thing that wasn't great. Why not have a great business too?

What could you do better the second time around?

I would work even harder to help employees understand why what we were doing was in their interests. For example, we set up a performance management system, and we said, "We want to have a high-performance culture." I came up with a term, which many of my fellow employees ultimately told me was a poor term - I said "we met expectations." Nobody wanted to just meet expectations. People wanted to succeed and perform well.

In Brazil we now sell hundreds of sugarcane harvesters [for cellulosic ethanol production]. Just a few years ago we sold close to none. Corn ethanol is not as efficient, but I think we can look forward to improvement in energy conversion. I think ethanol will become a significant source of fuel. We are keeping our ears to the ground for the inventions that Monsanto, DuPont, BASF, and others will have that may require different seeding or planting technologies. It's a big opportunity; we're counting on breakthroughs. I'm not a neo-Malthusian.

Featured
Most Popular
Markets
Data as of 2:44pm ET
Data as of 6:29am ET
Top News: CNNMoney.com
Today's top stories