Another handicap for hedge funds 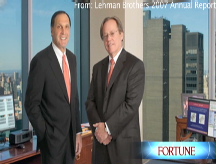 Citi paid a very dear $800 million to snag the fund and its founder Vikram Pandit, who now runs the entire bank, but the fund's investors got very little out of the deal. One wonders whether Old Lane was doomed from the moment it was bought, and whether death is the fate of funds that become part of Wall Street conglomerates like Citi (C, Fortune 500), Goldman Sachs (GS, Fortune 500) and UBS (UBS) - the mega-banks that have rolled up merchant bankers, trading floors, and personal wealth management groups.

True, the hedge fund had problems independent of Citi, generating a modest 6.5% in its first year and falling about 6% amid last August's credit turmoil. It continued to lag other multi-strategy funds thanks to bad credit bets. But problems at Old Lane are the latest in a string of blowups at banks that operate hedge funds. UBS shuttered its Dillon Read Capital Management last May due to big credit losses; and those problems gave markets a warning shot of the credit crisis to come. The implosion of two highly leveraged credit hedge funds last June was the beginning of the end for Bear Stearns. And Goldman Sachs' flagship Global Alpha fund began 2007 with $10 billion and ended the year with about $4 billion. Each of these debacles has had its own special flavor, but they all show how hedge funds can lose their mojo when they live within a big, bureaucratic institution.

More important than, but related to questions of culture is the issue of money. A hedge fund becomes a different kind of money-making animal once it's a cog in a bank's profit machine. It all comes down to a tale of two fees. Of the two types that hedge funds charge, one is better for managers (and by extension, investors) and one is better for the mothership.

For the manager, the 1% to 2% they charge to manage money keeps the lights on and the employees paid. The big paydays come from the incentive fee, the cut the managers take from when they make a return on their investments. This performance fee is typically 20% of the profits and that windfall keeps the best talent from leaving and generates the industry's legendary wealth. For banks, the value of a hedge fund lies in the steady stream of revenue from that 1% to 2% management fee. The incentive is to create big funds and increase the management fee. Performance is a secondary concern.

Once a fund is part of a bank, some cut of those fees goes back to the bank. The split will vary, but the bottom line is that the profits are shared. "Even if you perform really well, at the end of the day a manager will likely make less as a bank employee than as the manager of a standalone hedge fund," says Ferenc Sanderson, a research analyst at Lipper who studies hedge funds. "When guys are really good they won't want to be an employee because the opportunities for rewards are greater if they go it alone. The best guys tend to leave." Those managers may also get sucked into the organization that ultimately owns them.

That takes us back to Old Lane. The fund's mortal wound may have been inflicted in April, when investors took advantage of a clause that allowed them to withdraw money if three of Old Lane's top six managers left. Pandit triggered the clause by pulling talent from Old Lane in an attempt to right the ship at Citi. At that time, pretty much all of the outside investors withdrew their money, pushing assets under management down to $1.5 billion from $4.5 billion.

Even though hedge funds are volatile investment vehicles that can lose tremendous amounts of money, banks have been desperate to own them because they can cross sell the funds to wealthy clients want to invest in these alternative assets. But of course this creates another layer of conflict that has already piqued the interest in lawyers and clients who wanted to sue Bear after their hedge funds failed.

"In order to determine whether to invest in a bank run fund, investors should be asking themselves three questions. Did the hedge fund managers' strategy waver in any way during the funds history? Did the bank ever park any of its own bad assets in the funds, as was alleged at Bear Stearns? And is there enough transparency to ever determine the answers to these questions," says Jacob Zamansky, a a New York lawyer who is representing some investors that sued Bear after their funds collapsed. These firms will take on the possibility of violent quarter-to-quarter swings because people long to invest in these largely unregulated vehicles.

It should be noted that being owned by a big institutional parent was something that many investors may have cheered when Citi first bought Old Lane (in a deal that incidentally made Pandit $165 million richer). "The major positive is the potential cash infusion a big institution like a bank can provide if a fund falters," Denise Valentine, an analyst at Aite Group who focuses on institutional asset management and hedge funds had told Fortune long before Old Lane folded. However, she presciently noted, "There's no guarantee an institution will pump the money into a fund. There could be business reasons that prevent it from stepping in."

And when Old Lane needed a cash infusion, Citi had bigger needs of its own. The bank has raised $39 billion in capital since last November.

At the end of the day all investors want is hedge funds that make lots of money, whether they are standalone or the property of a big, struggling banking monolith. But with Old Lane in the very recent past, now may be as good a time as any to think about why a hedge fund that is not independent might not be able to generate the biggest (albeit riskiest) returns, the kinds of returns that make all the fees and pain on the way down seem worthwhile. With the hedge fund world getting bigger and good ideas always scarce, another handicap is the last thing this once high-flying world needs.