Reports of activation problems cloud the much-awaited rollout of a faster, cheaper phone. 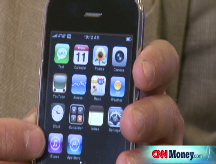 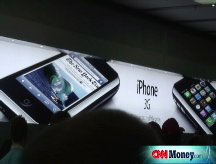 As eager buyers flocked to Apple stores, news sites chronicled reports that Apple's iTunes store was struggling with a massive outage that prevented buyers from activating their phones.

Apple's new iPhone is built on third-generation, or 3G, technology that is speedier than the original iPhone's network.

As Fortune.com first reported, AT&T, the iPhone's exclusive carrier in the United States, cut the price of the iPhone in half: an 8-GB model sells for $199, or $200 less than the original iPhone. A 16-GB version costs $299.

The Apple Store on New York City's tony Fifth Avenue, which drew a crowd of 150 people just after 5:00 a.m. ET, was moving customers through the line in about 10 minutes per customer when the doors opened at 8:00 a.m., according to Fortune's Philip Elmer-DeWitt.

But problems soon appeared. Elmer-DeWitt, who live-blogged from the store, was one of the first to report difficulty setting up his new phone. Eventually he was told, along with other customers, to go home and try to activate his device later.

Elmer-DeWitt was able to get his phone to work about three hours after his purchase. By early afternoon, there were more anecdotal reports online of users completing the activation process.

The system crash affected buyers throughout the 21countries where the new iPhone debuted Friday. Owners of the original iPhone and the iPod touch looking to upgrade their software were also hobbled by the breakdown.

The iTunes outage wasn't the only glitch Apple customers encountered Friday. Users attempting to sign up for MobileMe, which synchs e-mail and other data across Mac devices, also experienced technical problems. Apple began offering the $99-a-year service this week.

The iPhone 3G rollout was in stark contrast to last year's debut, when hordes of eager buyers camped out for days at Apple stores around the country and the purchasing process went off without a hitch - at least on Apple's end. AT&T, meanwhile, was hounded by activation problems.

On Friday, AT&T was quick to pin the blame on Apple. "There's a worldwide issue with iTunes that Apple is working to resolve," an AT&T representative said in an e-mail. Apple did not respond to a request for comment.

Early hangups aside, one analyst predicted Friday that the second version of the iPhone will have a stronger debut than its predecessor.

One major reason: Apple is releasing the 3G model around the world on Friday. The original iPhone was rolled out from country to country over the course of the last year.

"Based on on pent up demand, expanded distribution, lower pricing," RBC analyst Mike Abramsky wrote in a research note Friday, "Apple ships 1 million 3G iPhones in the first weekend." Abramsky said that would be roughly four times the number of iPhones shipped during the same time frame last year.

Some analysts warn that expectations for the new iPhone are too high. For one thing, the economy is a lot weaker than it was a year ago. Consumers may not no so eager to shell out the $2,200 or more it would cost for the iPhone and the mandatory two-year subscription.

Early reviews were more subdued than the glowing critiques of the first iPhone.

David Pogue of the New York Times called the iPhone 3G "a nice upgrade," but suggested it wasn't something existing iPhone owners should rush out and buy. The real novelty, Pogue said, was the App Store, where owners of the old and new iPhone can purchase games and other software - most for $9.99 or less.

Then there's the question of the battery: the high-speed 3G network consumes power faster than the original iPhone, whose own battery life has been the source of complaints.

They're out! The first iPhone 3G reviews

How the iPhone 3G is changing wireless
Related Articles