Anemic demand in a slowing economy is sapping strength across the industry, from Apple to Texas Instruments. 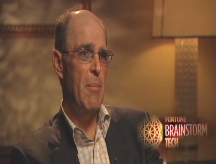 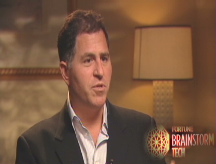 NEW YORK (Fortune) -- Not all precincts have reported yet, but the early results show that tech is losing in a global landslide.

Whether it's the shine rubbing off Apple (AAPL, Fortune 500), lower demand for networking gear at Ericsson (ERIC), inventory pile-ups at Texas Instruments (TXN, Fortune 500) and SanDisk (SNDK), or a slump in international sales at Yahoo (YHOO, Fortune 500), the bad news all seems tied to an economy that's slowing in the U.S. and abroad.

Apple helped sour the sector, after delivering strong June quarter numbers, by offering a surprisingly weaker outlook for the current quarter. The company cited costs related to a mystery product launch and more competitive pricing. On Apple's earnings conference call, CFO Peter Oppenheimer told analysts that the company would not seek wide margins that would provide an "umbrella" for competitors to sneak in and steal business from Apple.

Analysts and investors interpreted the thinner margin forecast as signs that the company will be forced to cut prices in an un-Apple-like effort to help juice sales. Apple products carry somewhat of a must-have coolness factor allowing the company to command a premium price. It's a bit of a bruise to Apple's image to be seen competing on price.

"It's so hard to find places to hide when things are going this bad," says Darren Chervitz of Jacob Asset Management. "I don't think we are headed for Armageddon but this will continue to be a difficult period."

Adding to the bigger, gloomier picture, Yahoo said Tuesday that international sales fell 8% below year-ago levels. The second-quarter profit of 9 cents a share failed to meet Wall Street expectations and the tepid outlook left the impression that the company is treading water.

The tech-laden Nasdaq is now down 13% so far this year, directly in step with the Dow Index and the S&P 500, which have been battered by steep drops in banking stocks.

On Monday, chipmaker TI and flash memory supplier SanDisk said they both saw a big drop in sales last quarter as device makers canceled orders to avoid oversupply in a weak market. Ericsson said Tuesday that it saw no improvement this quarter as stronger demand for wireless infrastructure in new markets fails to offset sluggish sales in core markets like Europe. And wireless giant Vodafone (VOD) said markets such as Spain are suddenly in decline as the economy tightens.

Google and Apple are glum

And Google's disappointing results were the clearest sign yet that slowing ad revenue growth had moved beyond the U.S. to Europe and the U.K. For its part, Google says it's ready for battle. "There is obviously evidence of a slowdown in the U.S. and Europe; you read it in the paper every day. We continue to believe that we are very, very well-positioned in such a slowdown and especially if it gets worse," CEO Eric Schmidt said Thursday.

But Apple is perhaps the most stunning indicator of how weak the consumer tech market has become, if for no other reason than the company's winning record of late. No gadget maker has a better hand right now.

The new iPhone hit its 1 million-sold mark on the first weekend of sales, and the Mac continues to be the fastest growing computer line in the industry.

But as Bernstein analyst Toni Sacconaghi points out, there's a small crack in the picture: Mac sales at Apple stores grew at the slowest year-over-year rate in more than two years. Apple shares fell as much as 8% in the wake of the earnings call, but by early Wednesday the stock had nearly recovered those losses.

The tech sector is being disproportionately punished for the wrongs of the financial sector, says Bay Bridge Capital Management analyst Scot Labin. The collapse of the mortgage industry has created a liquidity crisis among banks, but that condition certainly isn't true for tech, says Labin.

He likes Nokia (NOK) and Cisco (CSCO, Fortune 500), which are trading slightly above their one-year lows hit earlier this month. "They are flush with cash and generating lots more of it, even as their businesses are slowing," says Labin.

And as Nokia demonstrated last week with solid results and an upbeat outlook, sales are accelerating in new markets like India, Brazil and Russia. For its part, Cisco has largely sidestepped the U.S. slowdown in tech spending by expanding into these developing markets. But CEO John Chambers has recently signaled that a recovery of tech spending may not happen until sometime late next year.

"That's really been the saving grace in tech," says Jacob analyst Chervitz, referring to the new markets. "But it's impossible to see a scenario where the U.S. hits the doldrums and the emerging markets simply sail through."

"I think," says Chervitz, international markets "will be the next shoe to drop."