Why we tolerate bailouts

The Fannie-Freddie rescue draws only muted criticism, as Americans long for a return to the boom years. 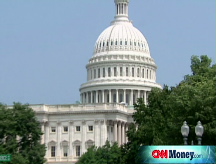 NEW YORK (Fortune) -- For the second time this year, the government is considering the use of taxpayer money to rescue private companies. Sen. Jim Bunning warns of creeping socialism, but he seems to have found few allies. As financial skeptic James Grant recently mused, Why no outrage?

There are plenty of theories, starting with the understanding that allowing the collapse of mortgage giants Fannie Mae (FNM, Fortune 500) and Freddie Mac (FRE, Fortune 500) - the government-sponsored enterprises that are the subject of the latest Washington bailout effort - could crush economic growth by strangling an already wheezing housing market. With inflation on the rise and the economy losing jobs, no one wants to steepen the slide toward recession - even at the cost of hearing Bunning say over and over, "Since when are we France?"

But another factor in the widespread acceptance of the housing bailout is the memory of how well investors have done in the last 25 years. The hope is that unusual measures can clear the way for still greater prosperity ahead - even if the near-term outlook for the economy remains muddled.

The House voted Wednesday to pass a housing rescue bill that authorizes the Treasury to lend more freely to Fannie and Freddie and to buy their stock. The bill, which is expected to be approved by the Senate later this week, comes just two months after the Fed brokered a rescue of imploding brokerage firm Bear Stearns, and days after the collapse of California lender IndyMac. Stocks have fallen almost 20% since they peaked in the second half of last year, as the mortgage crisis has deepened.

But if the past year has been undeniably ugly, a trip further back in time offers greater insight into many investors' outlook. The past quarter-century has generally brought strong appreciation in asset prices, interrupted by periodic brushes with financial disaster. As they unfolded, the crises - notably the 1987 stock market crash, the 1998 collapse of hedge fund Long Term Capital Management and the 9/11 terror attacks - appeared to pose serious threats to the health of the financial system and the economy. But in hindsight, those episodes popularly came to be seen as little more than excellent buying opportunities along a road that has taken the Dow Jones Industrial Average to 11,600 now from 1,000 in 1982.

Accordingly, even with stock and house prices down sharply, household costs soaring and the outlook for the financial sector grim, some see the mortgage meltdown as a mere blip on a graph of steadily improving national fortunes.

"You have this kind of optimistic view out there, from people like [Treasury Secretary Henry] Paulson and [Fed chief Ben] Bernanke, that things will work themselves out," says Dean Baker, an economist who is co-director of the Center for Economic and Policy Research in Washington.

Baker himself doesn't subscribe to that view, saying he believes the companies will face huge losses as house prices continue to fall and economic growth remains tepid. And no one is under any illusion that support of Fannie and Freddie, which own or insure some $5 trillion in mortgages and mortgage securities, would be cheap. The Congressional Budget Office said Tuesday it believes taxpayers could be on the hook for $25 billion in aid over the next two years, though it conceded that the cost could easily range from nothing to $100 billion or more.

Still, it's clear that the long view, a bullish take that peers beyond the Fannie-Freddie crisis, has its appeal. After initially fleeing from bank stocks amid worries about the health of Fannie and Freddie, investors have flooded back into the sector over the past week, sending shares well off their lows and reversing recent losses. Bank investor Tom Brown wrote this week that he believes the recent rally "marks the beginning of the greatest financial stock bull market in our lifetime, one that will be much broader than the bull market that began in 1990."

Of course, Brown has been wrong before, as he was last year with a big bet on subprime lenders that had his Second Curve hedge fund down almost 50% by November. But he says now that estimates of subprime-related losses have been overstated, and that valuations in the financial sector are extremely depressed.

Yet even if that's so, outsize gains in the stock market - and a return to strong economic health for the U.S. - may remain elusive. Taxes could soon be on the rise after being in retreat for years, as municipalities struggle to raise revenue. Interest rates seem almost certain to creep up in coming months and years, in another development that may not be welcomed by stock investors, home buyers or others.

"In the disinflationary boom years, stock markets had the wind at their backs and the Greenspan Fed saw little reason to resist it," economist Jim Griffin wrote last month in the ING Investment Weekly. "In the boom to come, the Bernanke Fed may have to adopt the more standard posture of leaning against the wind."

Meanwhile, even those who are generally optimistic about the markets see the debate on the Fannie-Freddie bailout - and the related whipsaw action this month in financial stocks - as obscuring the bigger economic questions in the U.S., where consumers are grappling with higher food and energy prices even as their paychecks remain stagnant. One of these days, policymakers will have to confront these issues, even if that debate doesn't allow for grand speeches about whether we're at risk of turning into France.

"Once this rally is over," writes David Kotok, chief investment officer at investment adviser Cumberland Associates, "the markets will have to confront the economic realties of our housing/energy/food/election-uncertainty/economic slowdown/pressured-consumer/large deficit/weak dollar situation."

Compared with that, the Fannie-Freddie problem seems almost quaint.