Finnish phone giant scores sweet terms on a licensing deal that competitors are unlikely to get. 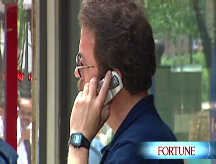 NEW YORK (Fortune) -- It took a small army of lawyers and about $200 million in legal costs, but Qualcomm finally struck a landmark agreement with phone giant Nokia.

The settlement of a year-old lawsuit was widely seen as victory for Qualcomm. But besides the boost to profits for the next, oh, 15 years, and the sweeping elimination of a massive legal headache, Qualcomm (QCOM, Fortune 500) signed a deal that gives Nokia (NOK) a steep discount on royalties that other phone makers won't get.

Analysts estimate the new deal with Nokia trims that royalty rate in half to 2% or lower. Charter Equity Research analyst Ed Snyder says the royalty rate is closer to 1% based on his discussions with Nokia about the impact of the new rate on margins.

Qualcomm investors cheered the deal that will add an extra dime a share to the current quarter's profits and nearly a quarter a share to the bottom line next year. The new pact not only includes a hefty back payment on money Nokia withheld for the past year, but extends the royalty collections beyond 3G phones to future 4G devices.

Qualcomm shares were up 18% in trading Thursday, and up 35% so far this year.

The dispute started in April 2007 when Nokia's original contract to use Qualcomm's wireless CDMA technology expired. Nokia refused to renew and sought a much lower royalty rate. After the two companies failed to reach an agreement, Qualcomm pushed for arbitration. A Delaware court was scheduled to start the arbitration hearing Wednesday when the companies reached an accord.

Under terms of the deal, Nokia will pay Qualcomm for rights to its technology and also let Qualcomm use some of its patents without paying a royalty. Nokia also agreed to drop an antitrust complaint it had filed against Qualcomm with the European Union.

Forged by Nokia's industry dominance and Qualcomm's legal tenacity, the deal probably won't sit well with other phone makers like Samsung and Motorola (MOT, Fortune 500), which are still paying full freight on royalties.

But the arrangement underscores Qualcomm's success as a highly profitable chip maker and royalty collector - a modern mix of brilliant wireless engineering and bruising legal might.

For more than a decade, the San Diego-based tech giant has successfully leveraged its claims to some basic technology in wireless networks and phones into lucrative licensing deals. As a result, phone makers have to shell out an estimated 4.5% payment to Qualcomm for each phone sold.

In an effort to look like a good citizen in the industry, Qualcomm has long promised to keep the playing field level by including a so-called most favored nation rule. That rule simply said if any phone maker cut a better royalty deal, those same terms would be available to all other phone makers.

But Qualcomm customers looking to benefit from the Nokia settlement are out of luck. The most favored nation rule will not be triggered by the Nokia deal, Qualcomm president Steve Altman told analysts on a conference call Thursday. If it did, he added, "I would be very happy [if they] provided us the same value as Nokia."

Qualcomm declined to comment on the terms of the Nokia deal. Analysts say the terms were probably written in a way that reflected Nokia's 40% market share and the value of the patents it included in the exchange.

"I guess everyone is equal, but Nokia is more equal," says IAG Research analyst Roger Entner.