Merrill: No longer in denial

A loss-making sale of impaired mortgage debt shows financial firms are coming to grips with the credit crunch. 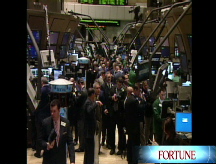 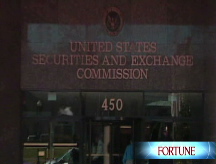 NEW YORK (Fortune) -- Don't look now, but the end of the denial phase of the credit crisis may be in sight.

When Merrill Lynch (MER, Fortune 500) on Monday sold a $30.6 billion portfolio of risky mortgage debt for 22 cents on the dollar, it took a big - though by no means final - step toward providing the sort of transparency that will have to sweep through the financial sector before any sustained rebound can take place.

The bad news is now that investors can see the picture a little more clearly, it's pretty ugly.

By selling the so-called collateralized debt obligations rather than simply taking another round of guesstimated markdowns on its balance sheet, Merrill blew a hole in the thesis of many who had argued that the credit crunch wasn't all that bad: That in the absence of marketplace sales, the writedowns of illiquid securities that firms were taking-a process known as marking-to-market-were actually bigger than the economic fundamentals dictated.

"I have previously argued that mark-to-market losses exaggerate the severity of the credit crisis," wrote investment strategist Ed Yardeni in his e-mail newsletter Tuesday. "Then again, Merrill Lynch converted its mark-to-market losses into permanent ones.... This is bad news for other investment banks and commercial banks trying to get rid of loans and securities in a market flooded with distressed assets."

The sale to the Lone Star funds, a Dallas-based investor in distressed assets, is obviously painful for Merrill and its shareholders. The company will book another multi-billion dollar writedown and have to raise more capital, further diluting existing owners' stakes.

Monday's news is also embarrassing for CEO John Thain. He has promised since taking the helm last December that Merrill wouldn't need to sell new stock or dump key assets - only to turn around, over the past two weeks, and raise $13 billion via the sale of stock and the firm's stake in the Bloomberg financial information company.

Just how bad the news is for Merrill's rivals remains to be seen. Eyes on Wall Street turned immediately to Citi (C, Fortune 500), which like Merrill has changed top management and suffered tens of billions of dollars in writedowns over the past year following an ill-advised push into the mortgage-backed securities arena.

"If Citigroup was to mark their exposure to a level similar to that of Merrill Lynch, it would imply a $16.2 billion writedown and roughly a $2 per share impact," wrote Goldman Sachs analyst William Tanona on Tuesday.

Citi he notes, values its holdings at higher levels because much of it predates 2006, when the shakiest mortgages were being written. Nevertheless, Tanona says, "we continue to believe they would struggle to obtain their prices in the marketplace today."

But trading in Merrill and Citi shares, which have plunged over the past year as the firms' mortgage-related mishaps have come into fuller view, was subdued Tuesday. That seems to give credence to the argument that Merrill's move is a necessary and even welcome exercise.

Not off the hook yet

This isn't to say Merrill's news is all good. To the contrary, Merrill did the deal on extremely unfavorable terms. Besides taking a paltry price, the firm agreed to finance 75% of the CDO purchase. That raised eyebrows because Merrill is effectively on the hook for any losses in the portfolio beyond the $1.7 billion payment being made by Lone Star.

That arrangement is similar to the one used earlier this year by Swiss bank UBS (UBS), which like Citi and Merrill has been laboring under a massive inventory of toxic mortgage-related debt. Back in May, asset manager BlackRock bought $15 billion of debt from UBS. BlackRock raised $3.75 billion in equity - more than half of it from the sovereign wealth funds that have plowed billions into Merrill and Citi over the past year - and UBS lent the firm the rest.

Deals in which sellers of assets provide the financing aren't ideal, because they expose the seller to possible future losses. But for now, at least there's hope that the banks are on their way to coming clean - and that there are investors willing to take the other side of the trade.

"The silver lining here is that there is a buyer in size," Morgan Stanley analyst Betsy Graseck writes. "This is a positive sign for liquidity in this distressed asset class."