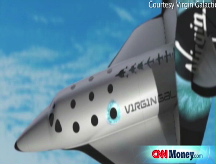 LOS ANGELES (Fortune) -- So here we were at 6:20 Monday morning at Los Angeles International Airport. Despite the hour, a disc jockey played pulsing club music, a soundtrack that soon continued onboard a Virgin America Airbus with "My Other Ride is a Spaceship" emblazoned behind its nose. A 20-minute flight later, the jet landed in Mojave, Calif., where tycoon Richard Branson awaited.

He was there to roll out the prototype for Virgin Galactic, which plans to be the pioneer in "space tourism" by ferrying well-heeled adventurers into space for joyrides at $200,000 a pop. The scene was vintage Branson, over-the-top and right out of a modern-day sequel to the Howard Hughes flick, The Aviator: The curtain drops, the hangar doors open, and here's RB giving the thumbs up from one of the funky-looking craft's two cockpits.

It's awfully hard to say at this point whether Branson, the cofounder of the Virgin Group, can get his spaceship off the ground. The more pressing question now is whether Virgin America can possibly stay aloft.

After all, Branson's big bet to crack the U.S. aviation market as he has overseas with Virgin Atlantic has, unfortunately, coincided with skyrocketing oil prices. Virgin America's concept from inception was that it would bring a customer-centric focus back to air travel, something Jet Blue (JBLU) had pulled off before hitting turbulence several months before Virgin America launched last August.

The Branson twist: Virgin has positioned itself as a kind of flying W Hotel lobby targeting media types, with more entertainment options, lots of connectivity (plug in the laptop, recharge the iPod), and competitive fares.

One of Virgin's bragging rights is that it's quickly becoming a preferred "civilian" shuttle for celebs; Reese Witherspoon, Janet Jackson and Paris Hilton are among those observed recently under the purple halogen glow of the first-class cabin. The airline was voted best domestic airline by readers of Travel + Leisure magazine only nine months into its existence.

As Branson often does, he has shared the financial risk, in this case with Cyrus Capital Partners of New York and Black Canyon Capital of Los Angeles. Virgin America CEO David Cush, a veteran of American Airlines (AMR, Fortune 500), admitted that $120 oil was not part of the business plan. So far, the airline has 22 Airbuses in service flying to seven cities, mostly linking Los Angeles, New York and San Francisco. (Chicago is likely next.)

Both Cush and Stephen Murphy, the CEO of the Virgin Group, told me they were waiting to watch both oil prices and how the U.S. airline industry shake out in the months ahead before contemplating any further change in course. For now, however, Cush said Virgin has scaled back the pace at which it plans to roll out new planes. Virgin America's partners have committed more than $400 million to the startup, and the airline hasn't backed away from its claim that it will be profitable by 2010.

I asked Murphy whether the Virgin brand is perceived differently in the United States versus the United Kingdom. He said that Virgin is ubiquitous in England - in addition to its big presence in airline and phone service, it sells TV and broadband service and rail lines, among other things. Here, there's Virgin Mobile and its big music stores (which Branson sold last year), but the brand is viewed as more of a European brand.

Of course, few things are more exotic than Branson's attempt to pioneer a space tourism industry - via a spaceship-building venture he created with aerospace pioneer Burt Rutan. The Virgin Group has spent, according to Murphy, close to $100 million on the project and has plans to spend $300 million more.

Around 250 people have already put down deposits for a place on a Galactic 12-seat craft, apparently undeterred that the amount of weightlessness they will enjoy at the flight's apex - around four minutes - works out to about $50,000 a minute. Naturally, the idea is that, with growing demand, prices will come down and flights will get better. Murphy said the company may look for outside investors.

For now, though, Branson cleverly seized the marketing opportunity by parking the Virgin America airbus on the tarmac directly behind his new launch vehicle. And Cush announced a contest in which frequent fliers on Virgin America will earn an entry with every 10,000 miles of travel for a contest to be among the first travelers on Virgin Galactic. Talk about an upgrade.

Asked what Virgin's biggest past failures have been, Murphy cites sodas and consumer electronics, two markets where, he says, the company didn't bring enough differentiation. This does not seem to be the challenge Virgin faces with its two very different US-based aviation endeavors.

But I did overhear this funny, and telling, exchange on the flight back from Mojave between a space travel enthusiast and a Virgin executive.

Enthusiast: "Thank you for your insane investment - or I should say `irrational' investment."

Executive: "Do you mean Virgin Galactic or Virgin America?"