Motorola break-up could unright the ship 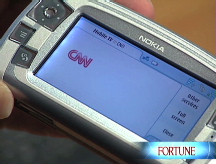 NEW YORK (Fortune) -- Carl Icahn's breakup strategy for Motorola (MOT, Fortune 500) has some cracks in it.

After reporting a surprise swing to profit and stronger-than-expected mobile phone shipments in the second quarter, Motorola seems to have pulled out of its nose dive, at least temporarily. Motorola shares jumped 12% Thursday in the wake of the earnings report.

Given the sudden brush with stability, some Motorola watchers are now questioning the logic of a costly and risky spin-off of its mobile phone business. If the company is truly on the verge of a recovery after two years of staring into the abyss, the need to set a separate course for the phone business may have passed.

On Thursday's conference call with analysts, Motorola chief Greg Brown was asked to justify the proposed spinoff of the phone business. Company executives responded with a third-quarter 2009 timeframe for the move, but offered no details of what would come of the Motorola name or what parts of the business would be involved.

"This entire idea stems from politics, not operations," says Charter Equity Research analyst Ed Snyder, one of the critics of the breakup plan.

The politics, in this case was sweeping regime change as Icahn entered the picture with a big set of demands.

In November, Icahn successfully ousted Motorola CEO Ed Zander and proposed a four-way split up of the company. "In my opinion," Icahn said at the time, "Motorola should be split into separate companies: a mobile devices company; an enterprise mobility company; a connected home company; and a company focused on mobile networks infrastructure."

With the wireless industry still growing at a hearty pace, and a big shareholder advocating for some quick returns, Motorola outlined plans in March to separate its mobile phone business from the rest of the company. At the time, big tech shops like Dell (DELL, Fortune 500) were reportedly interested in the opportunity to jump into the wireless devices business.

But as time passed, Motorola's plunge accelerated. Aside from one unacknowledged offer from India appliance giant Videocon, Motorola's takeover prospects, like its phones, saw little demand.

"At the time they announced the possibility of a spinoff, the tires got kicked. No one is kicking the tires now," said one industry strategist who asked not to be named.

As Motorola sunk, No.1 phone maker Nokia gained even more ground, and smartphone shops like Apple (AAPL, Fortune 500) and Research in Motion (RIMM) caught a big wave of growth.

Another reason to separate the handset business was the hope that once it was independent it could attract a strong CEO. But Motorola has struck out on that front so far. Last month, the company was said to have found the right person for the job, Hewlett Packard's (HPQ, Fortune 500) PC chief Todd Bradley. However, after word got out that he was being courted, he notified his HP staff that he was happy where he was.

Meanwhile, without a blockbuster phone, or even the promise of a dazzler in the wings, Motorola has managed, for one quarter anyway, to get its cost cuts caught up with its sales declines. It's a delicate stage in any turnaround, and probably not the best time to take on the new challenges of independence, says Charter's Snyder.

"As a stand-alone business, mobile devices would see higher costs, fewer resources and suffer a steep decline in productivity during the transition - everything the business does not need at this point," Snyder says.