Star bank analyst Meredith Whitney says the economy is about to sink into a deep recession. 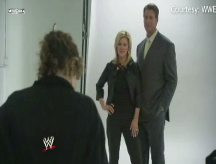 (Fortune Magazine) -- It's the first time I've seen Wall Street's toughest analyst look rattled. I'm sitting ringside at the WWE's Great American Bash at New York's Nassau Coliseum with Meredith Whitney - the Oppenheimer & Co. analyst renowned for her smackdowns of America's biggest banks. Though she and I are there to see her husband, pro wrestling star John Layfield ("JBL"), the evening's most compelling match turns out to be not Layfield's but a brutal-looking showdown between rivals Chris Jericho and Shawn Michaels. Midway through the bout, Michaels appears to suffer a bloody cut near his eye and begins stumbling around the ring as if he's just been lobotomized.

I'm more bemused than worried - every match thus far has ended with the vanquished looking broken and semiconscious. Whitney, however, is shielding her eyes. Maybe it's because her husband once sustained a cracked vertebrae during a match, but she's absolutely convinced that this time around, the semichoreographed mayhem in the WWE ring has taken a sickeningly painful turn. "No, I'm telling you, it's real," Whitney says of Michaels's injuries, which included (or so Jericho would claim) a detached retina. Or maybe not: "He's fine," WWE vice president Gary Davis would later tell me.

Good thing for investors that Whitney takes a more skeptical approach to banks than to pro wrestling. In less than a year she has transformed herself from a Wall Street backbencher - someone once known less for her research than for her marriage to Layfield and her stint as a stock commentator on Fox News - into the most influential stock analyst in America. And certainly the most bearish.

Whitney's rise to prominence began last October when she dropped jaws from New York to London with her audacious (yet spot on) prediction that Citigroup (C, Fortune 500) would be forced to cut its dividend to prop up its leaky balance sheet. She followed that call with forecasts of more losses and write-downs at the likes of Bank of America (BAC, Fortune 500), Lehman Brothers (LEH, Fortune 500), and UBS, as well as some insightful tangents on how the implosion of the bond insurers would threaten banks' bottom lines. Sometimes she seems steps ahead of management. On a Merrill Lynch conference call in mid-July, she asked CEO John Thain why the company wasn't unloading damaged assets and boosting capital. Thain demurred, but less than two weeks later, Merrill (MER, Fortune 500) did just that. It agreed to sell more than $30 billion of CDOs (collateralized debt obligations) for 22 cents on the dollar and sold stock to raise $8.5 billion in fresh capital.

Whereas her peers keep searching for some sort of light at the end of the tunnel, Whitney thinks the tunnel is about to collapse. Bank stock investors will get crushed if they jump back in now, she contends, because the banks are facing much, much bigger credit losses than what they've reported so far. Moreover, Whitney is convinced that the economy is about to sink into an "early 1980s-style" recession that will devastate the 10% of the population that became overextended during the housing boom. "It feels like I'm at the epicenter of the biggest financial crisis in history," says Whitney.

This isn't ego talking. "She definitely moves markets," says Gus Scacco, an institutional fund manager for AG Asset Management. An executive with a top hedge fund goes so far as to compare Whitney's influence to that of former Goldman Sachs chief strategist Abby Joseph Cohen in the late 1990s. "It's gotten to the point," the executive says, "where Meredith can't opine or write anymore without moving stocks."

Whitney's insights haven't always translated into lucrative investment picks. Based on the performance of her buy and sell recommendations relative to her industry peer group - what analyst tracker Starmine refers to as an analyst's "industry excess return" - Whitney's stock picking ranked 1,205th out of 1,919 equity analysts last year and 919th out of 1,917 through the first half of 2008. That said, evaluating Whitney solely on the timing of her buys and sells misses the point. It's not just that she's bearish on the entire banking industry. What makes Whitney so interesting is the brutality of her arguments and the evidence she summons in making them.

This is a problem, because every time their portfolios are hit by significant credit downgrades, banks are forced to improve their capital ratios. Often that means issuing reams of new stock, which leads to serious dilution, something shareholders at Citi, Merrill Lynch, and Washington Mutual (WM, Fortune 500) can unhappily attest to. "You're going to have this stealth pressure on bank balance sheets until you start to see the ratio of downgrades to upgrades change," says Whitney. "It's something people don't talk about."

Obviously the financial companies she covers aren't thrilled with all the dire talk. Whitney got an earful from Wachovia (WB, Fortune 500), she says, when she downgraded the stock to "underperform" in July. Investors aren't always thrilled either. She says she's received one death threat and hundreds of abusive e-mails and phone calls. But at least now there's a grudging respect for her work. "What do you do when your biggest tormentor keeps being right?" one ex-Citigroup executive asks when queried about Whitney. "You got to give it to her - she figured it out."