With a turn in commodity markets, pressure on Bernanke & Co. to raise interest rates slackens. 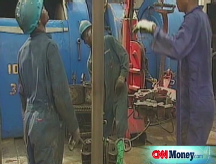 NEW YORK (Fortune) -- The sound of air hissing out of the commodities bubble is music to Ben Bernanke's ears.

After spending the first half of the year soaring to new highs, the prices of grains, metals and energy have dropped sharply over the past month. Crude oil has dropped almost 20% since peaking at $147 a barrel on July 11, while the price of corn recently tumbled to a low not seen since the spring.

Though prices remain above their levels of a year ago, declines in the prices of food and fuel could give Fed chief Bernanke some much-needed breathing room as he struggles to balance the risk of inflation with the threat that the financial sector will be swamped by losses tied to the housing bust.

"The first leg of the decline in commodities is under our belt," says PNC economist Stuart Hoffman. He says the commodity-price decline could "take the edge off inflationary expectations," a measure that Bernanke keeps a wary eye on.

In keeping its fed funds interest-rate target steady Tuesday at 2%, the policymaking Federal Open Market Committee warned that it may yet be necessary for the Fed to raise interest rates to keep inflation under wraps.

"Inflation has been high, spurred by the earlier increases in the prices of energy and some other commodities, and some indicators of inflation expectations have been elevated," the FOMC said. "The committee expects inflation to moderate later this year and next year, but the inflation outlook remains highly uncertain."

Still, since the Fed's last meeting at the end of June, some cracks have started to appear in the global-growth story that has been widely cited as helping to fuel soaring commodity prices.

On July 17, the International Monetary Fund issued a report saying it expects worldwide economic growth to slow to 4.1% this year and 3.9% next year, from the roughly 5% annual clip of the last five years.

Since then, highway data have shown that U.S. drivers have cut back on travel for seven straight months, and this week a report showed European retail sales fell the most in 13 years. The August futures contract for gold, used by investors as a hedge against inflation, rose fractionally Wednesday after dropping $21.50 Tuesday to $876.60 an ounce.

All those reports point to weakening demand for goods, if not an outright recession in the U.S. and Europe. After half a decade of rapid global growth pushed oil prices near $150 a barrel, "we're getting an old-fashioned demand response," says Hoffman.

Of course, reduced demand may not be the only factor at work. U.S. natural gas prices are down more than 30% from last month's high and the market is characterized by "obscene weakness," says Stephen Schork, editor of the Schork Report energy-and-shipping newsletter in Villanova, Pa.

Noting that recent years have seen the collapse of several big energy-trading firms - notably Amaranth, MotherRock and, most recently, SemGroup - Schork writes in a recent report that with the selloff in natural gas, it "certainly feels like someone imploded out there."

Back to the other problem

Whatever the reason for the turn in commodity markets, the leveling-off of prices is likely to shift the Fed's focus back to the stability of the financial sector.

Bernanke & Co. has cut the fed funds rate by 3.25 points, and vastly expanded its lending to financial institutions, since last September in a bid to ease the credit crunch.

Even so, the past year has brought the collapse of Bear Stearns, the fire sale of Countrywide, the failure of IndyMac and the near nationalization of Fannie Mae (FNM) and Freddie Mac (FRE). With house prices still falling, there's reason to believe the credit crunch will get worse before it gets better. Freddie, for instance, posted an $821 million second-quarter loss Wednesday. In response, the big mortgage firm set plans to slash its dividend by at least 80% and withdrew its guidance for future credit losses.

Policymakers have made abundantly clear, through their interventions on behalf of Fannie and Freddie and other moves, that they will defend the institutions they consider crucial to the financial sector and the real economy. With Freddie shares tumbling anew Wednesday, it's easy to see why some skeptics doubt the inflationary threat has been subdued.

"The recent housing bailout bill is the most inflationary legislation ever enacted and there is already talk of yet another economic 'stimulus' bill," says Peter Schiff, president of investment adviser Euro Pacific Capital, who has been calling for higher rates.

"The new money creation... will not only reverse the recent declines in commodity prices, but send other consumer prices soaring as well."

While the FOMC acknowledged that inflation risks "are of significant concern," only Dallas Fed President Richard Fisher voted for a rate hike. Recent anti-inflation statements by Fed members had suggested as many as three of 11 board members might vote to boost rates.