Cars that cut your gas bill in half 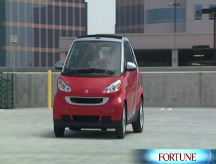 (Fortune) -- Attention, horsepower-hungry: Fear not the exploding array of environmentally friendly alternative vehicles. They are a hopeful signal of the potentially mind-blowing stuff to come.

Ferrari is exploring adding electric motors, which deliver peak torque from takeoff to top speed, to each wheel to capture regenerative braking energy to boost acceleration. Audi just won Le Mans for the second year in a row with a diesel racecar. The last time the automotive world saw this level of innovation was at the turn of the last century. Steam, anyone?

While we're waiting for great, green performance machines to arrive, and while fuel continues to break the bank, I decided to revisit the category of the Really Small Car, looking for the top gas, hybrid, and diesel performers.

For gasoline-powered vehicles, the slowest sipper is the Smart ForTwo. When I drove the top-end model, the Passion Cabriolet - a big name for such a diminutive item! - I was prepared to detest piloting what looks like a sawed-off sneaker.

But even before moving, the little beast was impressive: heated seats and side mirrors, paddle-shift technology, MP3 hookup, and a surprisingly roomy cockpit. Better, the thing fits anywhere - you can park two in a traditional space.

The biggest consumer concern is the Smart's impact-worthiness. Manufactured by Mercedes-Benz, the two-seater achieves an impressive overall four-star crash rating. I discovered a new concern, however, while heading home up a 20%-grade hill. Halfway up, even in manual first gear, the Smart stalled, unable to limp the final 20 feet. I had to gingerly reverse, stacking up traffic in both directions. But for all other normal driving (including highway - it actually felt better the faster it went, all the way up to 80 mph), the overall package is delightful.

If you want an even loftier mpg performer, Toyota's (TM) gold-standard Prius is still the answer. Weighing in at a compelling 48 city/45 highway mpg (city mileage is higher because the engine shuts down at a standstill) and starting at $21,500, the Prius may be an evergreen (pun intended), but with more than a million on the road, quality and durability are well proven.

And then there is one of the most exciting categories of all: new, ultra-low-sulfur diesel. The brightest auto engineers vote for diesel as the U.S. solution going forward. Why? Because of diesel fuel's higher energy density, diesel engines get 35% more miles per gallon than gas.

BMW, Mercedes, and Audi are all running to market in the next 12 months with ultra-refined, 50-state-legal models. But first to the U.S. (in August) is VW's $21,900 Jetta BlueTDI, which seduces with a 38 city/44 highway mpg rating, not to mention well-crafted details.

The competition, which will come to market with diesels over the next year, is focusing on larger SUVs designed to appeal to Americans: The Mercedes ML-Class and R-Class will get 18/24 mpg, and the Audi Q7 will get an average of 25 mpg combined.

But the long-term answer to efficiency, no matter the power plant, is still in the smallest package.