Jon Miller and Ross Levinsohn are searching for online stars - that their old employers will one day buy. 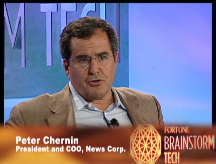 LOS ANGELES (Fortune) -- Pop quiz: name the breakout digital businesses that have been spawned by traditional media giants that aren't simply online offshoots of existing brands. There is, let's see, Time Warner's TMZ, and, depending on how it goes, NBC and Fox's Hulu.com.

Need more time? You get the point: big media seem to lack the genes necessary to create online stars from scratch or find future ones when they're still babes.

Two big-media refugees, Jon Miller and Ross Levinsohn, think they can do the job. "Here's the thing: we make the bets we make, because we know what people need," Miller says. "In a way, we provide outsourced R&D for the media industry."

It's an interesting niche, made more noteworthy by who Levinsohn and Miller are and the curious places they've been popping up lately. Both are deposed digital chieftains from big media - they were booted from their jobs running AOL (Miller) and Fox Interactive Media (Levinsohn) within two days of each other in November 2006.

A week later, they decided over drinks at the Four Seasons in Beverly Hills to ignore the headhunters and go into the venture-capital game. They found backing, and Velocity Interactive Group was born. They've made 14 investments, the sum of which give an illuminating (though not wildly surprising) view of where media is headed: think online video, giving audiences the tools to create their own content, and India, and you have a start.

And, yes, if it was so easy to pick winners every media company would have a few to crow about.

Several media executives I spoke to say they're watching what Miller and Levinsohn are doing and give them props for spotting a deal: Levinsohn suggested to News Corp. (NWS, Fortune 500) founder Rupert Murdoch that he buy MySpace in 2005 when it was still young, while Miller is credited with arguably AOL's shrewdest deal of its star-crossed recent history - buying Advertising.com in 2004.

They've shown up in walk-on roles in the months-long tangle between Yahoo (YHOO, Fortune 500) and Microsoft: both Miller, who lives in New York, and Levinsohn, who is based here, were put forward as prospective Yahoo directors. Miller was a choice of both Yahoo's Jerry Yang and agitator Carl Icahn, but his appointment was squelched at the last minute by Time Warner (TWX, Fortune 500) (which owns this Web site) because of his non-compete agreement; Levinsohn had been on a slate Microsoft assembled for a proxy fight it decided not to launch.

Miller was also brought in by a group of unhappy investors of CNET Networks to sit on a dissident board. But before a proxy fight could happen, CNET was sold to CBS (CBS, Fortune 500). Says Levinsohn: "Playing on the venture side allows us a great look at the future of the business, while staying involved in bigger companies allows us a window into what the industry leaders are thinking and looking for."

Last December, Velocity took over management of a venture-capital firm called ComVentures, which already had $1.3 billion invested in communications businesses and an initial fund of around $300 million for them to play with. (The pair aims to raise another fund this fall.)

Given their keen interest in finding the next killer video startup - whoever will be to YouTube (GOOG, Fortune 500) what Facebook is to MySpace - they've put money into Broadband Enterprises, Generate, and NextNewNetworks. Together, they comprise what Miller dubs a kind of "virtual studio": Broadband Enterprises produces and distributes video commercials for the Web; Generate is a talent manager and mini-studio for Web video; and NextNewNetworks creates and programs super-niche online video networks.

Another investment is MixerCast, a business that lets people make video "mash ups" of media or advertising - exactly the sort of thing that traditional media companies may not spend a lot of time on. Most recently, they funded Crowd Fusion, an online publishing startup that lets people create professional-looking Web sites.

Through Keyer Patel, one of three ComVenture partners who stayed on when it was rechristened Velocity, the group also made one of its biggest single investments: $25 million for a 5% stake in the Indian broadcaster NDTV Networks. The deal made Velocity look plugged in, when, a few weeks later, NBC (GE, Fortune 500) bought a 26% stake in NDTV with rights to acquire control.

Whether Velocity's founders will turn out to be smart, lucky, both or neither remains to be seen. But given how their last gigs turned out, it's pretty clear they think they have something to prove. And they insist Velocity is not just a parking spot until another big corporate job comes their way: Miller's potential involvement with Yahoo led to chatter that he was being considered to succeed Yang. (Miller denies it.)

Rather, they're happy to help find and build the next great thing that their former employers will one day pay up for. Levinsohn says he likes meeting with twenty-somethings who need as little as $150,000 to launch. "These kids haven't been beaten down by the corporate structure of anything," he says. "It's so refreshing."

Yahoo knows where you are
Related Articles