After years of go-go growth, firms like Lehman Brothers want to shrink to safety. Can they do it before the next storm? 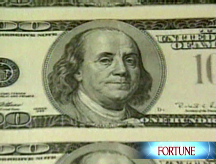 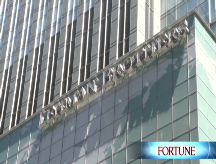 After years of rapid growth, the big players on Wall Street are downsizing. Stung by billions of dollars of losses and impoverished by plunging stock prices, firms from AIG (AIG, Fortune 500) and Citi (C, Fortune 500) to Goldman Sachs (GS, Fortune 500) and UBS (UBS) have been selling assets, laying off workers and mulling over possible split-ups.

But with credit markets sending distress signals again, even a measured scaling-back may not be enough to see some firms through the next tempest. That's why, like Merrill Lynch (MER, Fortune 500) before it, Lehman Brothers (LEH, Fortune 500) is now considering jettisoning a prize asset in the name of raising cash.

The struggling U.S. brokerage firm has approached private equity firms that might bid for a stake in its investment management arm, according to reports Tuesday. Possible partners in the unit, which includes the highly profitable Neuberger Berman asset management business that Lehman snapped up in 2003, include Blackstone and a group led by Carlyle, Hellman & Friedman and General Atlantic, The Wall Street Journal reports.

Because Neuberger Berman has been such a stellar performer, Lehman chief Dick Fuld has been seen as resistant to selling a stake in the investment management unit. But like Merrill Lynch CEO John Thain before him, Fuld seems to be finding that a deteriorating market for the risky mortgage-related assets that Lehman holds is making it imperative that the firm raise more money - even if it means selling off a growing business with excellent prospects.

The latest analyst to sour on Lehman's outlook is JPMorgan analyst Kenneth Worthington, who said Tuesday he expects the firm to take $4 billion in writedowns in the fiscal third quarter ending later this month. Worthington cut his third-quarter estimate to a loss of $3.30 a share from the previous 35-cent profit, citing expected reductions in the value of Lehman's holdings of residential and commercial mortgages and asset-backed securities.

"The credit environment continues to be difficult," he wrote, "exacerbated by a slowdown in execution and origination."

A big writedown, by depleting the firm's capital cushion against future losses, could force Lehman's hand on the sale of a stake in the investment management unit. Lehman has already gone back to the market three times this year to sell common and preferred stock, raising $12 billion in the process. But with a $61 billion portfolio of mortgage-related assets eroding practically by the day, the firm is finding that investors suspect it may need even more money.

Indeed, investors have been consumed this year by uncertainty over the value of financial firms and their mortgage-heavy portfolios. One measure of that opacity lies in how much of a firm's asset base it designates as Level 3, signifying that the values have been assigned without any market input because none was available. Over the past four quarters, assets designated Level 3 by the eight biggest commercial and investment banks rose to $612 billion from $461 billion, according to investment strategist Ed Yardeni.

While many of those assets no doubt have substantial value, the fact that no market exists to readily set a price suggests firms wouldn't be able to sell them to raise ready cash except at a steep discount. Beyond that, the sheer size of these illiquid asset stores is startling.

Recent data show that both Lehman and Goldman Sachs have more Level 3 assets than they do tangible equity, a measure of the firm's value to shareholders. A rare bright spot in the brokerage sector by that measure, Yardeni noted in a report Monday, is Merrill Lynch. Its Level 3 book is just half the size its tangible equity after last month's sale of $30.7 billion of troubled collateralized debt obligations at 22 cents on the dollar.

Of course, by other measures Merrill has been among the hardest hit by the collapse of the mortgage securities market and the other ills that have beset debt investors over the past year. The firm was forced last month to part with its 20% stake in the Bloomberg financial information giant as part of a recent push to raise capital. Bloomberg wasn't considered a core asset at Merrill, but the sale was surprising because Thain had ruled out selling the Bloomberg stake earlier in the year, noting the firms' long relationship and Bloomberg's excellent growth profile.

Growth, of course, is something the financial industry as a whole may be hard pressed to find in coming years. Lehman, for instance, had expanded to around 28,000 workers as of the end of its last fiscal year, from just 16,000 five years ago, as the company expanded in investment management and in mortgage-related businesses. But now, with funding costs rising and investors' appetite for risk at least temporarily suppressed, many of the opportunities that Lehman grew to take advantage of no longer exist.

Meanwhile, there's little sign that one typical market response to a massive selloff - a merger wave led by value-minded buyers - is about to materialize, because of the questions about the size and safety of the debt these firms have taken on. Worries about the financial system have become so acute that Harvard economics professor Kenneth Rogoff, onetime head of the International Monetary Fund, said Tuesday that he expects to see a big U.S. commercial or investment bank fail later this year.

Regardless of whether another Bear Stearns is on the way, Wall Street is going to have to get smaller before the next profit cycle gets under way - and that is likely to mean more moves like the one Lehman is considering.

"The financial sector needs massive consolidation," Merrill Lynch strategist Rich Bernstein wrote in a report last week, "because there is simply too much lending capacity in the global economy."