Time for a seismic shift in the offshore drilling debate

There's a way to find out how much oil waits on the U.S. continental shelf. So why don't we? 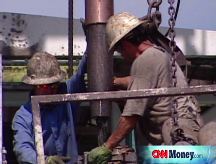 NEW YORK (Fortune) -- President Bush may want to end the ban on offshore drilling, but you wouldn't know it from his administration's failure to obey a key directive in the 2005 Energy Act.

As I wrote last week, one of the challenges to having an intelligent debate on drilling in the now off-limits areas of the outer continental shelf (OCS) is the lack of solid data on how much oil is really out there. Most of the existing data on offshore reserves is 30 years old and predates the development of 3-D seismic and other advanced technologies now used to map deep-sea oil fields.

The Department of the Interior estimates that there are 18 billion barrels of oil reserves in the off-limits areas (by comparison, the DOE thinks there are 40 billion barrels of undiscovered oil in Gulf of Mexico areas where oil companies are permitted to drill), but that's really just a guesstimate. If the government had done a 3-D seismic survey of the OCS, Congress would have much more accurate estimates, and those better estimates would surely shape the debate. Obviously the argument in favor of drilling would be stronger if we knew there were 2 million barrels a day of new production available, just as it would be weaker if we knew there were only 20,000. (The U.S. imports 10 million barrels of oil a day.)

What's interesting is that an amendment in the 2005 Energy Act did anticipate the need for better offshore oil data. It instructed the Secretary of Interior to "conduct an inventory and analysis of oil and natural gas resources beneath all of the waters of the United States Outer Continental Shelf" and to "use any available technology, except drilling, but including 3-D seismic technology to obtain accurate resource estimates."

There's just one problem: The Bush administration never did the seismic survey. When I called the White House to find out why, Bush spokesman Tony Fratto brushed me off to a colleague at the Department of Energy, who then referred me to the Department of Interior's Minerals Management Service. MMS spokesman David Smith explained to me that the seismic work was never done because Congress never provided funding. (The project would probably cost $1 to $2 billion and take six months to complete.) It's a fair excuse, and Democrats did in fact block an effort by Senate Republicans to get the seismic work funded in 2006. But did the Bush Administration itself ever bother to request the funding? "It was not in the president's budget," said Smith.

U.S. Sen. Jeff Bingaman, D-N.M., supported the amendment requiring a seismic survey in 2005 - it was sponsored by his New Mexico colleague, Republican Sen. Peter Domenici - and Bingaman has rightly rebuked the president for not supporting words with actions. "If the president believes - and if the Minerals Management Service within the Department of the Interior believes - there are areas that are currently covered by a drilling ban that have great promise," Bingaman said on the Senate floor in May, "then they should come forward and at least ask for the resources to go ahead and complete the survey they were directed to do."

Of course, if Bush had proposed the funding, it's possible it would have been voted down by the Democrat-controlled Congress, which has been philosophically opposed to any new drilling. But now, $4 gas seems to be creating some movement on the issue. A compromise energy bill proposed by the Senate's bipartisan "Gang of 10" - a group consisting of Sens. Mary Landrieu, D-La.; Saxby Chambliss, R-Ga.; Kent Conrad, D-N.D.; John Thune, R-S.D.; Lindsey Graham, R-S.C.; Blanche Lincoln, D-Ark.; Johnny Isakson, R-Ga.; Mark Pryor, D-Ark.; Bob Corker, R-Tenn.; and Ben Nelson, D-Neb. - would, according to a Landrieu press release, provide funding for "the first ever state-of-the-art seismic inventory of offshore areas currently off-limits to production."

All I can say is it's about time.