Inside the Obama Hollywood crush

At the Democratic National Convention, artists and execs are everywhere, but a serious media agenda is hard to discern. 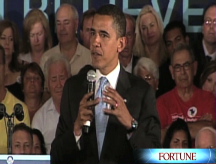 It's no surprise that the mostly liberal cultural mavens of Hollywood cannot contain their enthusiasm for Barack Obama (if that looks like Oprah cheering tonight during his big moment, it probably is.) It's also brilliantly perverse that while the Republican governor of California is an action movie star, John McCain's campaign derisively labels Obama as "the biggest celebrity in the world."

But from a business perspective, it's hard to explain why so many media folks are here. Rarely has so much firepower come together in one place with so little specific purpose.

Variety managing editor Ted Johnson, who writes a blog about politics and Hollywood, noted to me that in past campaigns media mavens have had good reason to get involved; both Bill Clinton and Joe Lieberman upset Tinseltown by complaining about violence in movies and TV. But in this campaign, voter and candidate attention is focused on weightier issues of war and economics. (Indeed, where Hollywood's self-interest is concerned, as Fortune's Michal Lev-Ram recently pointed out, tough times tend to mean good returns at the box office.)

One media figure at the DNC raising a few eyebrows is Liberty's (LINTA) Maffei. Granted the conglomerate he works for, the one controlled by billionaire John Malone, is based here. Maffei, though, is a major fundraiser for McCain. But Maffei, like Mitch Bainwol, CEO of the Recording Industry of America, and others I spoke with noted, there are no glaring policy differences between the parties where a lot of media companies' business interests are concerned. "There is no media agenda here," Maffei said.

Even so, some of the issues nearest to Malone's heart, like buying and selling assets and paying as little tax as legally possible in the process, would likely gain a friendlier hearing in a Republican administration. Then again, some of the biggest media mergers in history happened during the Clinton years. But the old debates over concentration seem almost quaint in an age of digital upheaval. (A joke making the rounds these days: Take my three newspapers and five TV stations in a single market - please.)

Dan Glickman, the president of the Motion Picture Association of America, told me pretty much the same thing as Maffei, although the MPAA's lobbying interests are quite specific - including copyright protection, trade, and free speech issues. "Those issues are non-partisan and we work both sides of the aisle," said Glickman, a former Democratic Congressman. "The party platforms are not focused on these issues. And where they are, they're pretty similar." That said, the MPAA and RIAA are both heading on to the Republican National Convention, and they co-sponsored a party here Wednesday night with Bono's ONE Foundation.

In the end, all this media firepower probably can't hurt Obama, regardless of how McCain's campaign mocks it. Don't take my word for it: After Joe Biden dropped out of the race in January having failed to gain traction against Hillary Clinton or his now running mate, he said to reporters: "This is about celebrity. You've never given any of us a chance."

Are you better off?