Wal-Mart and Tiffany are trying to clean up the gold-mining industry. Not everyone is cheering them on. 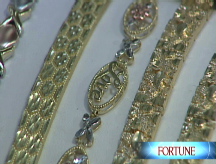 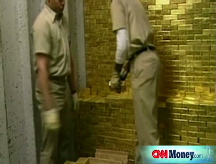 (Fortune Magazine) -- The Bingham Canyon open-pit mine is the biggest hole dug by man anywhere in the world - about 2 1/2 miles long and nearly a mile deep, according to its owner, Kennecott Utah Copper. Miners have been digging copper, silver, and gold out of Bingham Canyon, just outside Salt Lake City, since 1906. These days huge trucks that cost up to $3 million each work around the clock, hauling about 450,000 tons of dirt out of the earth each day. More than 99% is waste. But by expending vast amounts of energy - the mine operates its own coal-fired power plant - Kennecott is able to extract an average of about 795 tons of copper, 12,000 troy ounces of silver, and 1,400 ounces of gold a day.

It's the gold that Pam Mortensen has come here to see. Mortensen, 52, is in charge of buying fine jewelry for Wal-Mart (WMT, Fortune 500). And recently she has moved the world's largest retailer to the forefront of a loose alliance of businesses and environmental groups that have set out to clean up gold mining, one of the world's dirtiest industries.

No one is more surprised by this development than Mortensen, who grew up in Wal-Mart's hometown, Bentonville, Ark. When I ask her what she knew about mining before the company got onto its much-publicized sustainability kick a few years ago, she holds up her thumb and her forefinger to make a zero. "We were just buying pretty stuff from our suppliers," she says.

Now she has bigger things in mind. Wal-Mart is pushing miners to adopt strict environmental and social standards, verified by independent third parties. Its allies in this campaign include Tiffany & Co. (TIF) and the Richline Group, the world's biggest manufacturer of gold jewelry and a unit of Warren Buffett's Berkshire Hathaway (BRKA, Fortune 500). The retail giant is also working with a good-cop, bad-cop duo of environmental groups based in Washington, D.C. Business-friendly Conservation International consults, for a fee, with both Wal-Mart and mining companies. And Earthworks, a watchdog group, is behind a hard-hitting five-year-old media and Internet campaign called "No Dirty Gold." "The more you know, the less gold glows," its commercials say.

That kind of talk unnerves jewelers and upsets the mining industry. But facts are facts. Mining enough gold to make a typical 18-carat wedding ring leaves behind 20 tons of waste. In the U.S., metal mining creates nearly 30% of all the toxic releases measured annually by the EPA, more than any other single industry. And in poor countries, where regulation is lax, the picture gets really ugly. Gold mines and their waste have poisoned rivers in Guyana, destroyed rain-forest land in Papua New Guinea, and forced the evacuation of villages in the Philippines. In West Africa, thousands of children dig for gold under harsh conditions. According to the UN, a fifth of the world's supply is scratched out of the ground by desperately poor miners working for subsistence-level wages.

By contrast, Bingham Canyon employs union workers and boasts a safety record far better than its peers'. It doesn't employ cyanide, which is commonly used to separate gold from rock, and hasn't had a significant chemical spill in six years. And when Kennecott expanded the mine a decade ago and encroached on about 1,000 acres of wetlands, the company compensated by creating a 3,670-acre nature reserve near the Great Salt Lake. (Fortunately for the shareholders of Rio Tinto, Kennecott's London-based parent, the company can afford to do things right - the mine made $1.6 billion in profit last year as prices for gold, silver, and copper all rose.) In an often messy business, you might say Bingham Canyon is the gold standard.

So it makes sense that Mortensen has come here to buy gold and silver for a new, eco-friendly line of jewelry dubbed "Love, Earth," which went on sale at Wal-Mart and Sam's Club in July. The launch marks the first time a mass-market jeweler has been able to track its precious metals through the supply chain - no easy feat, as we'll see.

But Mortensen has tougher tasks ahead. Though Wal-Mart is the No. 1 retailer of jewelry in the U.S., with $2.8 billion in jewelry sales last year, according to National Jeweler, it's still a relatively small player in the world's $80 billion global market for gold. And the world's mining giants aren't in the habit of having their behavior dictated to them by a retail chain, even a big one. Canada's Barrick Gold (ABX), the world's largest gold-mining company, has refused to directly join with the retailers or environmentalists to set standards, preferring to be represented by its industry group. The state-owned China National Gold Group, now a major producer, has likewise declined to participate. Wal-Mart and Tiffany may have figured out how to begin shielding themselves and their customers from the tarnish of dirty gold, but the struggle to clean up the business is just beginning.

Perhaps no one has done more to alert the jewelry industry to these problems than Michael J. Kowalski, the 56-year-old chief executive of Tiffany & Co. An impeccably tailored man with degrees from Wharton and Harvard Business School, Kowalski is seen by some as a tree-hugging radical. "Almost everyone in the mining industry considered our degree of engagement suspect, stupid, or insane," he says.

As it happens, Kowalski loves the outdoors - he's a scuba diver and a hiker - but he has become an environmental activist for pragmatic reasons. "If the mining companies and the NGOs go to war, the battles are going to be fought on the sidewalks in front of Tiffany," Kowalski says. That's a nightmare scenario for the 151-year-old purveyor of luxury goods, because the appeal of gold jewelry, like that of a fur coat, depends upon its cachet.

Kowalski has been digging into Tiffany's supply chain since the late 1990s, after human rights groups accused the jewelry industry of trafficking in so-called conflict diamonds, also known as "blood diamonds" because they were traded by rebel groups in Africa to finance brutal civil wars. "Shame on us and the entire jewelry industry," Kowalski says. "It was a wake-up call." Jewelers worked with the NGOs and governments to develop a scheme called the Kimberly Process that enables retailers to assure customers that their diamonds are "conflict-free."