How Mr. PC is using Facebook and other Web 2.0 sites to help turn his company around. 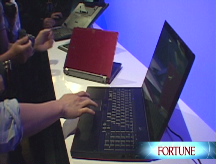 More Videos
Who's using Web 2.0?
Web 2.0, says Forrester consultant Josh Bernoff, "will become so common a way to do business that we won't talk about it anymore."
ERNST & YOUNG: Recruiting
Ernst & Young set up a page on Facebook two years ago. "We wanted to be able to reach candidates through a medium they're very comfortable with," said Dan Black, E&Y Americas director of campus recruiting.
BEST BUY: Employee feedback
Blueshirtnation.com went up two years ago as a way to tap into the collective insights of front-line employees. Along with the usual friendly networking, Best Buy workers ask and answer questions about the gadgets they sell.
INTUIT: Community customer support
Intuit launched this site in 2008 to help users of its TurboTax software answer questions while they prepare their taxes online. You post a question, and an Intuit employee answers - if some power user out there doesn't get to you first.

(Fortune Magazine) -- Write something about Dell online, and chances are the company will know about it in an hour or so. Dis the company in a blog or a Facebook group, and someone from a crack response team may even chime in, if only to let everyone know that Dell cares.

Spooky? Well, this is a new Dell (DELL, Fortune 500): a little more attentive online, and a little more paranoid. When Michael Dell took back the reins of his company in early 2007, one of his first acts as CEO was to give its web strategy a kick in the pants. The computer maker had plenty of hairy business problems to deal with - financial irregularities, a stagnating stock, profits down 28% in a year - but perhaps the most embarrassing was the thrashing its brand had taken online. On tech blogs and consumer forums, Dell had become almost a byword for lousy customer service.

It may be hard to remember now, but the company used to be as famous for good service as it was for good prices. In the early days Michael Dell used to include "Dear Michael" postcards with the computers he shipped, inviting customers to help him improve them. As the company ballooned, it lost some of that connection with customer needs. How did the Dell brand get so tarnished? The consensus in the tech world seems to be that the company simply became arrogant and set in its ways.

The important thing is what Dell is doing about it. The company has been logging on, reaching out to potential customers, and trying - sometimes awkwardly - to listen to them. And it's using social media to do so. That's right, Web 2.0 isn't just for college sophomores anymore. Apparently you can use it to patch up a $37 billion PC business too.

Of course, it's not unusual for companies to care about what people are saying online; specialists like Buzzlogic and Radian6, which supplies the monitoring service to Dell, do brisk business tracking web sentiment. What stands out about Dell is the investment it has made in its self-awareness. It has a squad of 42 employees who spend their workdays engaging with the communities on Facebook, Twitter, and other social media. What is this Team Web 2.0 learning? One important nugget: that potential customers spend 99% of their time on the web doing research and just 1% actually buying. So the company has tried to dial down the hard sell and become - or at least appear to become - more helpful. The first step was to add blogs and message boards in the hope that irate customers will talk to the company rather than gripe to the whole Internet. "If we don't do that at Dell.com, it's going to be on CNET or somewhere," Michael Dell says. "I'd rather have that conversation in my living room than in somebody else's."

The next phase of Dell's listening campaign has been to go beyond damage control and into building better products. During a recent chat, the CEO was eager to show me a laptop his company developed with customer input. Engineers get a lot of their feedback the old-fashioned way, hand-delivering early models to major buyers. But they also pick over a Dell site called IdeaStorm early in the development of a project for a sense of what the masses care about. The site lets anyone sign in and offer suggestions - and vote other people's ideas up or down. If you've ever used the wisdom-of-crowds social network Digg, you get the idea. "Now you go to IdeaStorm and type in any keyword you can think of that has anything to do with what you're working on, and see what people are saying," says Dell.

An example of this collective-design approach in action is Dell's popular new Latitude laptop. Dell engineers granted the wishes of IdeaStorm users by adding keyboards that light up in the dark, a fast connection technology called eSATA, longer battery life, and a rainbow of color choices. The moves earned cautious praise from Jeremiah Owyang, a Forrester Research analyst who has followed the company. "We've frequently positioned them as a case study in letting customers decide where the company is headed," he says. "Very few are doing it as well as Dell."

Consumers are noticing the change too. The latest quarterly figures from the University of Michigan's customer satisfaction index show that Dell is at the top of the rankings again for Windows PC makers, as rivals HP (HPQ, Fortune 500) and Gateway sink. According to a study Dell commissioned from measurement firm Visible Technologies, negative sentiment toward the Dell brand has dropped from 48% in 2006 to 23% today. Even some of Dell's harshest critics are softening a bit after the company's recent online moves. Ben Popken, editor of the Consumerist blog, says, "They've been downgraded from evil to bumbling."

The real question is whether customer-friendly operations like IdeaStorm translate to better financials. The jury's still out on that. (Dell's gross margins have increased to 19.1%, up from 16.6% last year, thanks mostly to cost cutting. Staying at that level won't be easy - Dell has been lowering prices, which helped cause a 17% fall in profits last quarter.) The jury's also out on whether IdeaStorm reflects the opinions of the average Dell buyer. Many of the sites' most popular ideas involve adding the open-source Linux operating system instead of Windows. If IdeaStorm votes were a true gauge of customers, Linux PCs should be flying off the shelves. They're not. "How much better is this as a way to measure customer demand?" wonders Mike Gotta, analyst at Burton Group, a consulting firm. "It's not proven yet."

Maybe it's enough for now if Dell's online adventures lead to more satisfied customers. A self-help site the company recently launched lets people solve one another's tech problems, delivering a twofer: It creates a Good Samaritan vibe around the Dell brand and saves the cost of staffing a support call. Bob Pearson, a VP who leads Dell's online community efforts, says contributors so far have offered 10,000 fixes that have been viewed 2.5 million times. Which, if nothing else, helps keep down the "Dear Michael" postage.