The Detroit automaker replies to a recent Fortune column criticizing it for not striking an alliance with Renault-Nissan in 2006. 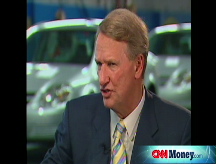 NEW YORK (Fortune) -- Fortune senior editor Alex Taylor, in a recent MotorWorld column, took General Motors to task for failing to strike an alliance with Renault-Nissan in 2006. Taylor wrote that, despite potential savings of $10 billion annually, the proposed deal would have disrupted GM's corporate culture and the company vetoed it. You can read the column here. GM initially declined comment for the story. Since its publication, Steve Harris, GM's vice president of global communications, has submitted the following response:

In his Aug. 13 story ("For GM, What might have been"), writer Alex Taylor shows a selective memory when he revisits General Motors' discussions two years ago with Renault-Nissan about a possible alliance. In the process, he engages in the kind of "woulda, coulda, shoulda" speculation that serves little constructive purpose. It's like arguing what would have happened if Bill Buckner had fielded that ground ball cleanly. Or if Time-Warner, your magazine's parent company, had not done the AOL deal.

Let me remind you of the circumstances in 2006 that led GM (GM, Fortune 500) to decide not to enter into a tie-up that favored the other party involved. As General Motors' CEO Rick Wagoner said at the time, under the proposed structure, benefits from the potential joint projects were highly skewed to Renault-Nissan.

The structure also would have required us to sell a substantial equity stake in GM at no premium, along with preferential rights, which could have effectively foreclosed us from entering alliances with other automakers. And Renault-Nissan made it clear they were unwilling to pay any premium for these considerations. GM's Board of Directors unanimously rejected the proposal because it was not in the best interest of GM stockholders.

Taylor cites what he describes as an internal analysis from Renault-Nissan about this potential alliance. But whatever analysis Taylor saw is not the document that was jointly produced by General Motors and Renault-Nissan, in which both companies jointly agreed on every number or range of numbers and which was submitted to GM's Board of Directors.

Today General Motors is focused on the future, not the past. We are in the midst of a transition that is reinventing the automobile and our company. GM's sales are growing rapidly in many important markets around the world, including China, Russia, Brazil and others. We have introduced new vehicles that are drawing rave reviews from our customers as well as critics. Those include the Saturn Aura, the Chevrolet Malibu, and Cadillac CTS. Both the Aura and the Malibu were selected as North America Car of the Year, and the CTS won Motor Trend Car of the Year.

Most significant of all is the Chevy Volt, a plug-in electric vehicle that will deliver 40 miles of gasoline-free driving and a total range of approximately 400 miles using a small gasoline engine to recharge its battery. This revolutionary vehicle will be on the market in 2010.

We recognize that we are in the midst of difficult times for our business, as a slowing U.S. economy and rising fuel prices have had an impact on every automaker. We are taking the difficult and sometimes painful actions to reduce costs in our North American operations. Through a series of actions, GM reduced its structural costs in North America by $9 billion between 2005 and 2007, and has plans in place targeted at further reductions of $6-7 billion in North America by 2010.

We believe that our new products, new technology and restructuring actions will make us a stronger company in the future. All of us at General Motors are dedicated to achieving that goal.