Lehman in the red zone

WIth stock price plummeting and clients skittish, the brokerage firm is reportedly in talks with potential buyers. 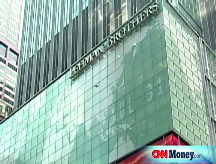 More Videos
At Lehman, time for action is now
The firm promises to re-engineer itself, but doubts will linger until CEO Richard Fuld produces a real deal.More
Lehman pays up for independence
The storied investment bank buys time with an ambitious risk-reduction plan. But will it be enough?More
Lehman's plunge continues
Shares of Wall Street firm plunge 40% following analyst downgrades, just a day after reporting $3.9B loss.More
Lehman: Too big to fail?
Wall Street's tepid reaction to the investment bank's plan to raise capital might mean the Fed will have to save Lehman just as it did Bear Stearns.More

(New York) Fortune -- On Wednesday, Lehman Brothers CEO Dick Fuld offered up a radical plan to save his beleagured firm. Today the capital markets are giving him the thumbs down.

The firm's announcement that it will sell 55% of its money management franchise, which includes Neuberger Berman, and spin off almost $33 billion in distressed real estate securities has clearly been interpreted as "too little, too late."

Moreover, mounting questions about the firm's ability to keep going--and the looming threat of major credit downgrades--have forced Lehman (LEH, Fortune 500) into negotiations with potential buyers, according to published reports.

The Wall Street Journal, citing sources familiar with the matter, reported Thursday that Lehman is actively shopping itself and said that suitors included Bank of America (BAC, Fortune 500) and British bank Barclays (BCS). Spokespeople for Bank of America and Barclays both said they had no comment.

The Washington Post reported late Thursday afternoon that the Treasury Department and Federal Reserve are engineering a sale of the investment bank through a consortium of private firms. The Fed was not immediately available for comment.

A Treasury spokesperson repeated an earlier statement: "We are monitoring markets and remain in contact with market participants."

The widely held view on Wall Street is that the best possible Lehman suitor would be a large commercial bank, with the ability to absorb and finance Lehman's massive-and massively troubled -commercial real estate securities portfolio.

Fuld is also talking to private-equity firms about buying the money management division, according to the Associated Press.

Meanwhile, long-time Lehman customers at four high-profile hedge funds told FORTUNE that they have sharply curtailed their trading with the firm.

One general partner at a $4 billion bond fund said that he is only doing trades that settle "next-day," or overnight, and now has no longer term counter-party risk with Lehman.

Customers' refusing to engage in longer-term derivative trades, if it becomes a trend, is problematic indeed for Lehman since derivative contracts are one of the last high-margin areas of trading. The profits from trading most bonds are measured in basis points and commissions from stock trading are pennies per share.

Among Lehman's many problems is the threat of possible multi-step ratings downgrades from the three major ratings agencies -- and all that entails for the costs of a financing-driven, narrow-margin business.

The fear among traders is best expressed in the rising price of Lehman credit default swaps. Traders at hedge funds and rival investment banks have pushed the price of insuring a $10 million block of Lehman debt to extremely high levels.

As of early afternoon, it cost an investor $650,000 to insure a $10 million block of the firm's debt for one year. Earlier in the day, buyers of Lehman insurance were required to pay up to $790,000, several times the cost of insuring other investment banks' debt. The pullback was attributed to rumors of Lehman's discussions with would-be buyers.

It should be noted that these swap trading levels show that traders are discounting the liquidity offered Lehman from the Federal Reserve's primary dealer credit facility. After Bear Stearns tumbled in March, the Fed began making loans available to institutions like Lehman that it didn't directly regulate, as it does banks.

Betting that Lehman topples, despite the availability of government liquidity, goes against one of the oldest axioms of Wall Street: Don't Fight the Fed.

But with the Fed still digesting the $30 billion it guaranteed in J.P. Morgan's March purchase of Bear Stearns, as well as the government's conservatorship of Fannie Mae and Freddie Mac (and possible looming trouble at Washington Mutual), it may not be willing to guarantee the debt of another major institution.