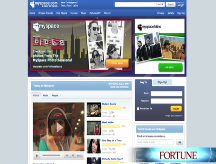 (Fortune Magazine) -- Myspace founders Chris DeWolfe and Tom Anderson have had an uneasy relationship with the music industry. Nearly every music act has a MySpace page; some of them, like British pop diva Lily Allen and American psychedelic-funk purveyor Gnarls Barkley, have used the social network to become stars. But two years ago Universal Music Group discovered unauthorized songs from U2 and Jay-Z on MySpace and sued the site in federal court.

Well, that relationship is about to improve. In August some of the industry's most prominent executives - including Universal's Jimmy Iovine - showed up at MySpace headquarters in Beverly Hills for a visit that couldn't have been more cordial. "It was almost like we were all singing 'Kumbaya' together," DeWolfe says.

It was the first meeting of the board of directors of MySpace Music, an unprecedented joint venture between the social network and three of the Big Four music companies: Universal, SonyBMG, and Warner Music (WMG), which together account for 77% of all U.S. album sales, according to Nielsen SoundScan. MySpace is also in talks with the fourth biggie, EMI, whose U.S. market share is 9%.

MySpace Music, scheduled to launch in September, promises to be the most significant rollout of a digital-music service since Apple's (AAPL, Fortune 500) iTunes. It will enable MySpace users to listen to any song from the catalogs of the three music giants free. There will be on-screen ads along with that music, but yes, it will be free. And that includes U2 and Jay-Z-and Christina Aguilera, Kid Rock, and rap superstar T.I.

DeWolfe says the key to the new service is this: Users will be able to visit the pages of major label artists and click on the songs they like as they listen. Then they'll be able to create playlists on their own pages made up of those tracks: "There will be a button that says, FOR THE FULL CATALOG, CLICK HERE," he says. "That's what's never been done before." The idea is that people will use the playlists to personalize their MySpace page, which, in turn, boosts traffic. "Think about why people go to a music service," he says. "They go to iTunes because they just want to get the songs and get out. MySpace is different. It's like going to your friend's house, and they have cool music playing in the background that makes the experience that much better."

If listeners really like a particular song, they can buy it with one click and have it routed immediately to iTunes or Windows Media Player via a download service created by Amazon (AMZN, Fortune 500). To Amazon CEO Jeff Bezos, the alliance makes perfect sense: "MySpace, with its hundreds of millions of users, is an important place for music discovery, just like the Amazon MP3 store."

Bezos sounds excited, and no wonder. He's confident that Amazon's alliance with MySpace will increase his company's share of the music-download market. The market research firm NPD says that Amazon's year-old MP3 store is already the nation's second-largest digital-music retailer, after iTunes. MySpace's music company partners are also pleased that the joint venture will strengthen Amazon's hand. Although they won't say so on the record, they aren't happy with iTunes' current domination of digital music. Says Ivan Gavin, COO of SonyBMG's BMG Label Group: "Competition isn't the worst thing in the world."

DeWolfe believes that MySpace Music could generate enough money through ad sales, downloads, and eventually music-related e-commerce like T-shirt and concert ticket sales to put the industry back on its feet again. The music labels, of course, could use some new revenue streams right now. The industry is in a state of upheaval. Last year alone, CD sales declined an astonishing 20% - that's $2 billion in revenue gone. Digital sales rose by $500 million - nowhere near enough to make up the difference. "We think this has the ability to change the economics of the music industry and create a revenue stream that replaces lost CD sales," he says.

Yet for MySpace Music to succeed, it will have to sell ads - lots of them, and at commanding prices. Its label partners want a penny each time someone listens to a song on an ad-supported service. That means MySpace Music needs to charge $10 for every 1,000 ad impressions just to break even. Think how many MySpace pages automatically play a tune when you land on them; each one counts as an impression. MySpace won't comment, but media buyers say it has been able to charge only $3 per 1,000. Why? Because there's a glut of social-networking ad inventory on the market. That's one reason Fox Interactive Media, MySpace's parent, missed its revenue target for the fiscal year ending in June by an estimated $100 million.

DeWolfe promises that MySpace Music will have no problem selling ads. He points to his company's 300 ad salespeople, most of whom are working on the new music service. Toyota, McDonald's, and State Farm are sponsoring the launch. "We recognized that this is a groundbreaking addition to the music industry landscape," says Doug Frisbie, national media manager for Toyota Motor Sales.

In a way, MySpace Music was something that DeWolfe and Anderson had to do. Their site had a huge audience of music fans, but it wasn't making enough money. So nine months ago they pitched the idea of an ad-supported service to News Corp. (NWS, Fortune 500) CEO Rupert Murdoch and his deputy, COO Peter Chernin. The two executives took a typically contrarian stance. They weren't bothered that other major media companies have been fleeing the music business. "This venture marries the largest music community in the world with the biggest music catalogs in the world," Murdoch tells Fortune. "We're confident it will be a big success."

"It's not like we were going out and starting a record label," says Chernin. "This is something we'd been talking about for a while."

Here's a big question hovering over MySpace Music: Will it actually improve the music industry's slumping overall sales? "We believe that you can't just have ad-revenue-sponsored content," says Michael Nash, Warner's chief digital strategist. But why will people buy more music when MySpace will be offering so much for free? DeWolfe says people will still need to buy tunes to play on their iPods.

The truth is, MySpace et al. are making a leap of faith by pushing free music. Dalton Caldwell, CEO of imeem, an ad-supported music social network that has 27 million users, warns that DeWolfe is setting the bar too high. "I don't know if we can be superheroes and save the world," says Caldwell. "I think it would also be difficult for anybody to say they can replace lost CD sales."

Don't tell that to DeWolfe. He's already talking cultural juggernaut. "Think about MTV," he says. "Not necessarily what they are right now, but how they created pop culture in the late '80s, early '90s. I think that's what MySpace Music will do now." Maybe he should get those lost CD revenues replaced first.