What went wrong with the storied investment-banking firm is a warning for all of Wall Street.

For Lehman, the bell tolls 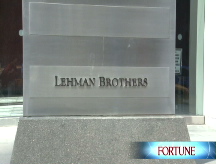 (Fortune Magazine) -- The sad fate of Lehman Brothers is a cautionary tale of what's gone wrong with Wall Street.

Lehman ended up on the financial scrapheap because it played - and ultimately lost - a dangerous game involving high-stakes bets and huge borrowings. The firm's reported profits grew nicely through last year. But to keep its profits growing, Lehman was taking on more and more risk.

Lehman (LEH, Fortune 500) borrowed too much money, put too much of it into deals of dubious quality, and then insisted for months that all was well when it was apparent that all wasn't well. Monday's bankruptcy filing is a sad end for a firm once regarded as prudent and well managed.

The saddest thing of all is that decades ago Dick Fuld, now Lehman's CEO, bitterly opposed having the firm do big, aggressive deals with its own capital. But as we said in July, during one of Lehman's recurring crises, Fuld's decision to do the risky things that he opposed in the 1980s hurt Lehman badly.

Back then, Fuld's trading faction from the old Lehman Brothers was struggling against the firm's banker faction, led by Steve Schwarzman and Pete Peterson.

The bankers wanted the firm to use its own capital to do deals. The traders opposed it.

The trader-banker war so weakened Lehman that it sold out to American Express (AXP, Fortune 500) in 1984. Fuld, a Lehman lifer, stayed on, while Schwarzman and Peterson went off to found the Blackstone Group (BX) and become billionaires.

In 1994, AmEx, giving up its "financial supermarket" strategy, spun off a small, undercapitalized firm called Lehman Brothers, with Fuld as CEO. (That's why, despite what you read, Lehman wasn't a 158-year-old firm; it was a 14-year-old firm with a 158-year-old name.) Lehman's leverage - borrowings relative to capital - grew and grew, even as other firms were cutting back as the credit crunch worsened.

For example, last October, with the real estate collapse well underway, Lehman (in partnership with the Tishman Speyer real estate firm) paid a whopping $22.2 billion to do a leveraged buyout of a big apartment developer, Archstone. Losses on the deal began to surface almost immediately. Alas, we can't give you Fuld's take on all this; he's declined to talk with us for months.

Lehman looked as if it would be able to survive more or less intact after the Federal Reserve Board announced in March that it would make huge loans available to eligible investment banks. This came shortly after the Fed and the Treasury forced a fire sale of Bear Stearns, and let it be known that the timing was no coincidence.

But Lehman never fully regained the market's confidence, Fed and Treasury support notwithstanding.

That leads us to a second Wall Street lesson from Lehman: that the Fed and Treasury can no longer control events as they once could.