MySpace Music isn't offering one. So why should anyone else in an age of free ad-supported tunes?

What's everyone yelping about?
Or is it digging? Or ninging? Zyng-ing? A rundown of some Web 2.0 startups getting a lot of buzz, if not necessarily a lot of revenues.
View photos
Apple's latest iPod crop 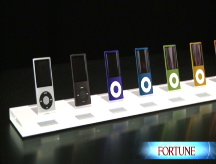 NEW YORK (Fortune) -- Back in April, MySpace CEO Chris DeWolfe vowed to create a groundbreaking new digital music service offering everything from ad-supported free songs to iTunes-like downloads to monthly subscriptions. But DeWolfe ended up jettisoning part of that plan.

The social network's highly anticipated joint venture with Universal, Warner Music (WMG) and SonyBMG debuts later this month without a paid subscription service. "If you think about it, what do most people do with subscriptions?" says DeWolfe. "They listen to all the music they want for $10 or $15 [a month]. They'll be able to do that for free on MySpace Music, and it will be ad-driven."

DeWolfe raises an interesting question: What is the future of online subscription services when there is increasing amounts of free - and legal - music available from services like MySpace (NWS, Fortune 500) Music?

Napster, of course, had hoped for a better outcome, given that the digital music business is growing rapidly. According to the Recording Industry Association of America, digital music revenues, driven primarily by download stores like Apple's iTunes, rose 26% last year to $2.4 billion. Subscription revenues, however, declined by 2.6% to $200 million.

Napster is the only one that releases detailed financial numbers. They aren't pretty. The company has never turned a profit. It lost $16 million in its most recent fiscal year ending in March on what it described in a press release as "record revenues" of $127.5 million. As of Friday, the last trading day before the announced sale to Best Buy, Napster stock had fallen 78% since its relaunch as a legal service in 2003.

So why did so many digital media companies embrace the model in the first place? They didn't have much choice. Early on, the big record companies wanted a digital business model that wouldn't cannibalize CD sales. They were convinced that subscriptions were the solution.

There was only one problem: Consumers have never shown much interest in renting music. The reincarnated Napster attracted only 700,000 customers, even though it spent lavishly on marketing. "People like listening to music for free on the radio or their computers and people like buying music to own," Garland says. "Subscription is a hybrid of the two. But variations of those two offers haven't really connected. Nobody wanted to rent vinyl LPs or CDs either."

Nor did people want to pay as much a $14 a mouth for music from Microsoft and Napster only to find they couldn't down load it onto their iPods.

Indeed, there's no fiercer critic of online subscriptions than Apple CEO Steve Jobs. This is what he told Fortune just before launching the iTunes music store in 2003: "Nobody ever went out and asked users, 'Would you like to keep paying us every month for music you already thought you bought?' "

"The record companies got this crazy idea from some finance person," he added. (Apple (AAPL, Fortune 500), needless to say, has never offered subscriptions.)

Surprising, the model still has supporters in the music industry. "Subscription hasn't really taken off," says Michael Nash, Warner Music's chief digital strategist. "We think it might moving forward. People who subscribe tend to buy a lot more CDs. There is a great opportunity to discover music. People fall in love with it."

But Warner is hedging its bets. It's a partner in MySpace Music and has an equity stack in Imeem, the social network that pioneered ad-supported free music and which now has 27 million monthly users.

That's a big number - especially when RIAA says Rhapsody, Napster and Microsoft combined have only 1.8 million monthly subscribers. But executives at these companies shrug off the implicit threat. "We think there is a lot more to be done with subscriptions," says Chris Stephenson, Zune's general manager of marketing and entertainment.

"Most of what we've seen on the social services is really music sampling: 'Oh, my friend sent me a track,' " says Rhapsody Vice President Neil Smith. "It's not really a music listening experience."

Smith also questions how long ad-supported music services will be around. Neither MySpace nor Imeem will disclose specifics about their deals with the record labels, but people in the music industry say the companies typically want as much a penny every time as song is streamed, or a share of the ad revenue by song, depending on which is larger. There's such a glut of social networking ad inventory that these companies can't charge a high rates.

True enough. But now that Warner, Universal and SonyBMG have equity stakes in MySpace Music, they have to figure out a way for it to survive. Maybe they'll cut their royalty rates. They need a new business model. This much is certain: it won't be music subscriptions.