A reprieve comes from the Fed, but the insurer's future is surely going to be very different.

Why laissez-faire was ignored 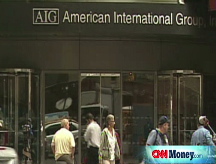 NEW YORK (Fortune) -- The Federal Reserve's ninth inning rescue of AIG may soothe capital markets and keep the company's bondholders from taking a beating, but the financial services titan's future will look very different, and likely much narrower.

AIG (AIG, Fortune 500) has secured an $85 billion bridge loan from the Federal Reserve in exchange for a stake in the company that could reach 80%. But the deal comes with the provision that AIG sell off businesses to raise capital and repay the debt. It's likely to have to sell any number of insurance units that were long-time cornerstones of its franchise to raise funds.

Also likely to be in the offing is a substantial downsizing of its once-vaunted AIG Financial Products unit, a group that has brought in billions in revenue, but whose insurance guarantees on risky credit default swaps tied to the mortgage market has led to writedowns that have helped destroy the insurance giant's equity capital and its credit rating and led to the government's intervention.

AIG's management had already been discussing a vast restructuring and downsizing of the firm. The Federal Reserve's involvement now gives the firm time to proceed in orderly fashion.

Also likely on the auction block is International Lease Finance Corp., a unit that several weeks ago AIG's CEO, Robert Willumstad, declared a "core" holding. According to company filings, its book value is $7.4 billion and in ordinary times, would appear able to fetch a handsome premium. But these are no ordinary times.

ILFC has long been a money-maker for AIG - last year it booked $604 million in net income - but its $27 billion in debt requires a big sized buyer with a strong credit rating and healthy balance sheet.

AIG started out as an insurance company and under former CEO Hank Greenberg grew into what was one of the world's most important financial companies, with a $180 billion stock market capitalization and operations in over 100 countries.

The notion that chunks of the company will now go at fire-sale prices is surely a bitter pill for shareholders, who have seen the value of their holdings decline by more than 90% this year, and that's before the dilution of their stake that will come with federal involvement.

AIG's general insurance subsidiaries are broadly considered the world's finest. In a good year, these units can make upwards of $20 billion in pre-tax profit. In the past 12 months, according to regulatory filings, they've made $6.6 billion.

It is impossible to believe that large rivals aren't pondering a bid for at least the international sections of the insurance unit.

But again, having to sell under pressure is going to be difficult. There's at least one buyer, however, willing to take a plunge. According to Reuters, longtime AIG rival Munich Re has indicated some (unspecified) AIG businesses are attractive.

An Australian hedge fund analyst, John Hempton, made an argument on his Bronte Capital blog earlier today that "a wise independent 'multi-trillionaire'" might be inclined to loan AIG the $70 billion it is seeking to meet collateral demands and replenish its equity capital.

He reasoned a loan of $70 billion to AIG makes sense since the insurance units throw off so much income. At an interest rate of 8%-10%, the payoff could be handsome, he argued.

Hempton's opinion seems to be in the minority, leaving the lender of last resort to step into the breach.

5 questions: Why AIG matters to you